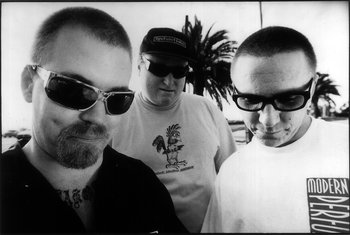 "Because you're down with the band that they call Sublime, right?"
— Romeo off Second Hand Smoke
"Let me tell you about a girl I know, had a drink about a hour ago"
— Opening line to Sublime's first hit "Date Rape"
Advertisement:

Sublime consisted of the late Bradley Nowell on lead vocals and guitar, Eric Wilson on bass guitar and sometimes keyboards, and Floyd "Bud" Gaugh on the drums, with a few of their friends appearing on multiple albums in various capacities. Most notably: Dr Todd Foreman, the saxophonist; "Field" Marshall Goodman (also known as Ras MG) providing DJ duties, occasional rap solos, and filled in as drummer during Bud Gaugh's stint in rehab; Kelly Vargas, who also filled in on drums while Bud was unavailable; and Opie Ortiz, who not only sang on various albums, but was the band's favorite tattooist, and behind most of the artwork on their albums. Oh, and Lou Dog, Bradley’s beloved Dalmatian, who frequently joined the band on stage.

Known for their combination of laid back surfer attitude and punk mentality, Sublime is very hard to pin down. Any song can be a delightful mash up of punk, hip-hop, and reggae, with lyrics that make you laugh even as you think, "Did he really just say that?" before switching to sobering reality about drug use, life in the ghetto, and sexually transmitted diseases. Although they became popular as a part of the Third Wave of Ska and often toured with Ska Punk bands, Sublime only released a handful of actual Ska Punk songs, and were more influenced by reggae than ska music.

The band started in 1988, when Bradley came home on Spring Break and jammed with Eric and Bud for a week in Eric’s sound proof garage. The band would get back together that summer and start playing bars, clubs, parties, and BBQ's. That summer also saw the infamous "Riot on the Peninsula", where a concert got out of control while Sublime was playing, culminating in police being called in to stop the show and clear out the crowd.

The band would continue to record, drink, tour, drink, cause serious mayhem, and drink, on the West Coast for the next several years. They even started their own record label, Skunk Records, to distribute their albums, which they famously did out of the trunks of their cars.

The band eventually gained serious recognition on the original Warped Tour in 1995. They were kicked off the tour due to bad behavior. Bud Gaugh was arrested for drug possession twice on tour, all three were pretty much constantly drunk, the band once started a mud slinging fight with their audience, but the final straw was when Lou Dog bit two fans. They were invited back to finish the tour after missing several shows.

Sublime had only three full studio albums, 40oz. to Freedom, Robbin’ the Hood, and Sublime, before Bradley Nowell’s overdose and death from heroin. The third, final, and most successful album was released less than two months after Bradley’s death. According to The Other Wiki Sublime eventually went 5x Platinum in the U.S. If you were in high school or college in the mid to late 90s, you probably remember the self-titled album spinning endlessly at almost every party, and in everyone's CD collection. Seriously, punks, metalheads, classic rock fans, jocks, dorks, everyone had this album. It may even be reasonably argued that, were it not for Nirvana's Nevermind and Pearl Jam's Ten, Sublime might very well be remembered as the album that defined the '90s. At the very least, it's somewhere on the list.

Following Nowell's overdose, Bud Gaugh and Eric Wilson attempted to keep the sound alive, touring with various friends and musicians who worked with Sublime as the Long Beach Dub Allstars, and eventually Wilson alone with the Long Beach Short Bus, which only released one album.

The band seemed over until December 2009, when Eric and Bud reunited with new lead singer Rome Ramirez. The new trio was well received by most fans and various members of Bradley Nowell's family. The main objection was due to the fact that the name "Sublime" was copyrighted only under Brad Nowell's name, leaving it the property of his estate (read: his widow). This might also result in some conflict over rights to profits turned from sales of merchandise. After a little legal haggling the band was redubbed Sublime with Rome.

Notable songs recorded by Sublime include "Date Rape", "Badfish", "What I Got", "Santeria", "Wrong Way", and "Doin' Time".

Tropin' is what I got: