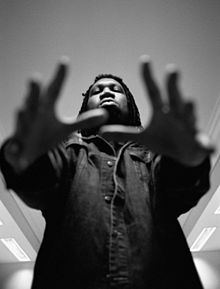 So... you're a philosopher?
Allow me to include I have a very stable mood
Poetic education of a high altitude
I'm not an MC, so listen, call me poet or musician
A genius when it comes to making music with ambition
—"Criminal Minded"
Advertisement:

KRS-One (Knowledge Reigns Supreme Over Nearly Everyone, born Lawrence "Kris" Parker, August 20, 1965) is an American hip-hop artist known for his use of philosophical and socially conscious themes in his music.

He was born in Brooklyn, New York, and left home at the age of sixteen to become an MC, and eventually came to live in a homeless center. While there he began doing graffiti using the moniker KRS-One, and also while there he met Scott Sterling, a.k.a. DJ Scott LaRock, with whom he would eventually form the hip hop group BDP (Boogie Down Productions). In 1987 the duo released their debut album Criminal Minded, an album widely considered to be one of the best in hip-hop history.

Then, in 1987, DJ Scott LaRock was fatally shot in an altercation with a local gang, profoundly affecting the young KRS-One. He would go on to release the album By All Means Necessary, a markedly different album from Criminal Minded that would cement his image as a more thoughtful hip-hop artist, in stark opposition to many artists of the day. Future records would become increasingly more political as he adopted the moniker The Teacha, a name he took up in keeping with what he viewed as his place in hip-hop, to teach people.

In 2008 he was awarded a Lifetime Achievement Award from BET as a pioneer of hip-hop music and for his efforts with Stop The Violence, a movement named for its goal of stopping the violence in hip hop.

With Boogie Down Productions:

"Tropes Reign Supreme Over Nearly Everyone":