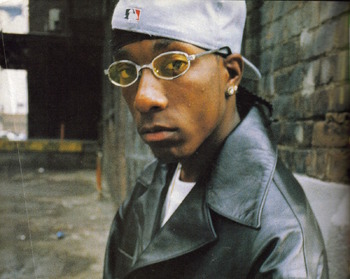 You can't kill me, I was born dead.
"I'm so ahead of my time, my parents haven't met yet."
—Big L, in all his modesty.
Advertisement:

Lamont Coleman (May 30, 1974 – February 15, 1999), known professionally as Big L, was an American rapper from Harlem. He is widely regarded as one of the greatest and most lyrical rappers of all time, and is known for helping to pioneer horror core. He was also a member of two music groups : Children of the Corn, also consisting of neighborhood friends and fellow Harlem rappers Mase, Cam'ron, Herb Mcgruff and Bloodshed, and D.I.T.C.(Diggin' in the Crates Crew) also consisting of Lord Finesse, Diamond D, O.C., Fat Joe, Buckwild, Showbiz and A.G.

Emerging from Harlem, New York in the early to mid-1990s, Coleman became well known amongst underground hip-hop fans for his freestyling ability, and was eventually signed to Columbia Records, where he released his debut album, Lifestylez ov da Poor & Dangerous in 1995 and is now considered by many fans as a classic album. On February 15, 1999, Coleman was shot nine times and killed by an unknown assailant in a drive-by shooting in his hometown of Harlem. His second album The Big Picture, unfinished at the time of his death (slated to be released in 1999), was completed by his manager Rich King and released in August 1, 2000. It charted in the United Kingdom and was certified Gold by the Recording Industry Association of America in October 2000.

Big L is remembered for his use of wordplay and his lyricism. Henry Adaso described him as "one of the most auspicious storytellers in hip hop history.".

"And mad hoes, ask Beavis I get nothing Butthead."