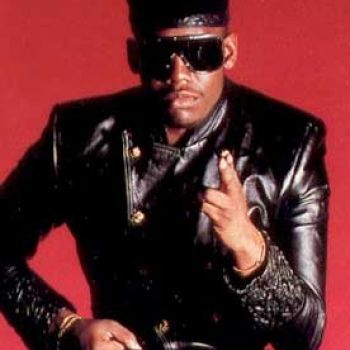 Knowledge Is King.
Mohandas Dewese (born August 8, 1962 in New York City), better known as Kool Moe Dee, is one of the longest active rappers of all time, from 1976 to the present day, and one of the original pioneers of rap, alongside Grandmaster Flash and the Furious Five and the The Sugarhill Gang.
Advertisement:

Although Moe had been rapping since at least 1976, it was when he formed The Treacherous Three with Special K, DJ Easy Lee and Spoonie G (who would leave shortly after the formation and was replaced by L.A. Sunshine) in 1978. The group became well known for their singles "Body Rock", "Feel the Heart Beat" and "Action", and their song "The New Rap Language" earned Kool Moe Dee the distinction of inventing the "double time flow", which involved rapid sixteenth-note rhythms, with a lot of internal rhymes.

On September 11, 1981, while still a part of the Three, Moe was featured in a very one-sided rap battle

with Busy Bee Starski at Harlem World, taking everyone there by surprise by roasting Starski. Before that night, rap "battles" were based around playing to the crowd. Moe's roast of Starski had changed the face of the "battle rap" forever, laying the groundwork for many rap battle leagues and diss tracks in the years to follow. That same year, they moved over to Sugar Hill Records with Grandmaster Flash and the Furious Five. in 1984, they were featured in the movie Beat Street with Doug E. Fresh.

In 1985, the Treacherous Three disbanded. Unlike the other members, who pursued solo careers, Moe finished school and attended the State University of New York at Old Westbury, where he received a degree in communications. The next year, he released his self titled solo album on Jive Records. Backed by production from a then-16 year-old Teddy Riley (Who had produced the Gold-selling single "The Show" the same year Moe was in University), the album reached the eighty-third position on the Billboard 200.

in 1987, Kool Moe Dee became the instigator in a years-long feud with LL Cool J, whose album Bigger and Deffer went Double Platinum that year. Moe noted that LL had stolen his style of rapping, and did not show any appreciation of the rappers who paved the way for him, claiming to be "rap's new Grandmaster". This, along with his personal resentment of the fact that all of hip hop's founding fathers (excluding himself) were being ignored, would lead to the creation of How Ya Like Me Now. Once again backed by Teddy Riley, Moe made his grievances known on the album cover, posing in front of a white Jeep crushing LL's signature Kangol hat on the cover. This would prove to be a success for Moe. How Ya Like Me Now went platinum and helped kickstart the New Jack Swing era alongside The Golden Age of Hip Hop, churning out two hit singles: the title track and "Wild Wild West", which both hit the top 30 of the R&B charts.

In 1988, LL Cool J retaliated to Moe's verbal attacks with "Jack the Ripper" a B-side from the single "Going Back to Cali", calling him a "punk" and "washed up". Moe, in turn, released his third album Knowledge Is King in 1989, which included the hidden track "Let's Go", a scathing response to the comments LL had made on "Jack the Ripper". Taking a brief break from the feud, Moe contributed vocals to Quincy Jones' album Back On The Block in 1990, alongside Ice-T, Melle Mel, and Big Daddy Kane. This earned Moe his first and only Grammy Award, for "Best Rap Performance by a Duo or Group". That same year, he appeared on "Self Destruction" alongside Public Enemy, Heavy D, KRS-One, and others as a part of the "Stop the Violence Movement".

1991 saw the decline of Moe's career. His fourth album Funke Funke Wisdom bombed hard in the wake of LL Cool J's Career Resurrection with Mama Said Knock You Out. Moe would be released from Jive Records a year later. A 1993 compilation release and a fourth album, Interlude did nothing to return him to his previous mainstream success. His last major song appearances were on Will Smith's 1999 single "Wild Wild West", where he re-recoreded the chorus from his own song of the same name, a featured spot on Macklemore and Ryan Lewis' "Downtown", and a remix of "Where Are They Now" by Nas in 2007.