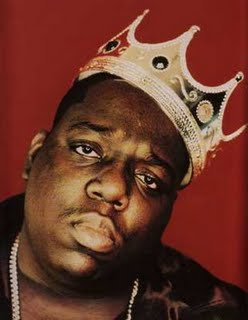 Mr. Smalls, dressed in his typically modest fashion.
"This album is dedicated to all the teachers that told me I'd never amount to nothin', to all the people that lived above the buildings that I was hustlin' in front of that called the police on me when I was just tryin' to make some money to feed my daughters, and all the niggas in the struggle, you know what I'm sayin'? It's all good baby baby..."
—"Juicy"
Advertisement:

Christopher George Latore Wallace (May 21, 1972 - March 9, 1997), known by several stage names such as Biggie Smalls,note after a fictional gangster in the 1975 film Let's Do It Again The Black Frank White,note after Christopher Walken's character in King of New York and Big Poppa, but most prominently by The Notorious B.I.G., was an American rapper. "B.I.G." and "Biggie" were rather apt names, as he stood at 6'3'' and weighed between 300 and 380 pounds.

After a childhood of crime caught up with him, Wallace decided to focus on his other talent: Rapping, under the name Biggie Smalls. This lead to a chain of events that resulted in him teaming up with Uptown Records A&R and record producer Sean "Puffy" Combs. However, soon after signing the contract, Combs found himself fired from Uptown and started up a new label, Bad Boy Records, which Wallace quickly became a part. Later that year, Wallace gained exposure on a remix to Mary J. Blige's "Real Love," but later found out that his original pseudonym Biggie Smalls was already in use, so he adapted a new moniker: The Notorious B.I.G. (the letters stood for Business Instead of Game).

After more successful appearances on hit songs (and his solo track "Party and Bullshit" appearing on the Who's The Man? soundtrack), and a marriage to singer Faith Evans just nine days after meeting her at a Bad Boy photoshoot, Wallace released his first album: Ready to Die. The album was a success, reaching #13 on the Billboard 200 chart and was very well received by critics and listeners alike, to the point that it's considered one of the greatest hip-hop albums of all time.

Unfortunately, Wallace became involved in the infamous West Coast/East Coast hip-hop quarrel. In 1994, Tupac Shakur, his former friend and associate, believed that Wallace, Combs and Uptown Records founder Andre Harrell, had prior knowledge of a robbery in the same recording studio that Wallace and his entourage were in at the time of the incident that resulted in Shakur being shot repeatedly and losing thousands in jewelry. While they denied the accusations, Shakur signed onto Death Row Records in 1995, and Bad Boy Records and Death Row, now business rivals, became involved in an intense feud. Recording of Wallace's second album began in September 1995, although the 18-month process was frequently interrupted by not only the highly publicized dispute he was tangled up in, but injury and legal trouble, stemming from charges of second-degree harassment and possession of weapons and drugs.

On September 7, 1996, Shakur was shot multiple times in Las Vegas in a drive-by shooting. Six days later, he perished due to complications from the gunshot wounds. Almost immediately fingers were pointed in Wallace's direction, which he denied, claiming that he was in New York at the time. An anti-violence hip-hop summit was held in the wake of Shakur's death.

Other than the birth of his first son, things didn't get much better from there. Wallace was involved in a car accident during the recording sessions for his second album that shattered his left leg and forced him to use a cane. And on top of that, he faced criminal assault charges and was forced to pay $41,000 after a friend of a concert promoter claimed to have been robbed and beaten up by Wallace and his entourage in May of 1995. The incident remains unsolved to this day, but all robbery charges were dropped. After this chain of events, Wallace declared that he wished to focus on "peace of mind" and his friends and family.

In 1997, Wallace traveled to California to promote his upcoming album. Unfortunately, on March 9, just fifteen days before said album was to be released, he was murdered in a drive-by shooting. The shooter remains unknown - as with the murder of Tupac, fingers have been pointed in all directions, but to this day no one really knows who did it. He was 24.

A movie about his life, Notorious, was released in 2009, starring rapper Jamal "Gravy" Woolard as the Notorious One himself. Woolard reprised his role as Biggie eight years later in the Tupac Shakur biopic All Eyez on Me.

Not to be confused with the Alfred Hitchcock film of the same name, not even for a minute.