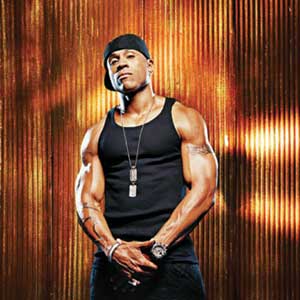 Hard as hell.
"Don't call it a comeback! I've been here for years!"
— The famous opening line of "Mama Said Knock You Out"
Advertisement:

James Todd Smith (born January 14, 1968), better known as LL Cool J (acronym for Ladies Love Cool James) is an American rapper and actor. LL Cool J was born and raised in Queens, New York, the son of Ondrea (née Griffith) and James Smith. At the age of four, he saw his mother and grandfather shot by his own father. After they recovered from their injuries, his mother began to date a young physical therapist she met while in the hospital. The therapist treated Ondrea kindly, but for years he abused Todd physically and verbally, which resulted in Todd becoming a bully himself. It was during this period that he started wearing hats all the time (one of L.L. Cool J's trademarks is the fact that people never see him without a hat on—until recently). Fortunately, Ondrea finally discovered what this man was doing to her son and left him. He went to I.S.238 Susan B. Anthony Academy in Queens, New York (Hillside). He started rapping at the age of nine. In his youth, LL Cool J performed in the church choir, participated in the Boy Scouts, and delivered newspapers. At age 16, by using a mixing table purchased by his grandfather at Sears, Smith produced and created demos and sent them to various record companies, including Def Jam Recordings.

Under his new stage name, LL Cool J (Ladies Love Cool James), Def Jam released his first record, the 12" single "I Need a Beat". The single sold over 100,000 copies. The success of "I Need a Beat" helped lead to a distribution deal with Def Jam and Columbia Records in 1985. Soon after, he dropped out of Andrew Jackson High School to record his debut album. He is known for romantic ballads such as "I Need Love", "Around the Way Girl" and "Hey Lover" as well as pioneering hardcore hip-hop songs such as "I Can't Live Without My Radio", "I'm Bad", "The Boomin' System", and "Mama Said Knock You Out". He has released thirteen studio albums (the first twelve of which were exclusively released on Def Jam Records) and two greatest hits compilations. His most recently released album is 2013's Authentic, which is his first album not released on the Def Jam label.

He has also appeared in numerous films, including two with director Renny Harlin. He is also interviewed in the 1986 Hip-Hop documentary Big Fun in the Big Town at a time when he was only 17 years old and still lived at his grandmother's place. In 2015 he adds hosting to his repertoire, in Lip Sync Battle.

He now lives in Manhasset, New York, with his wife and four children. He currently hosts the classic Hip-Hop station Rock the Bells(channel 043) on Sirius XM Radio).