The Series Has Left Reality 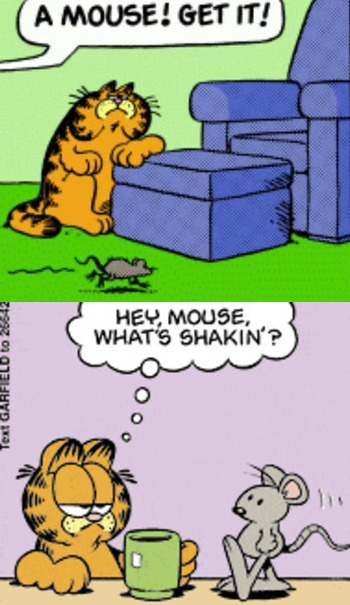 Some works take place in a world that is just like the real world, and some take place in a world that clearly isn't. This trope is about works that start out in the real world but then very definitely leave it. Sometimes, it's because fantastical or science-fiction elements are introduced into a work that up until then had been "real world". Sometimes, the setting is revealed to have an Alternate History that distances it from reality.

These new elements might bring about a Genre Shift if they change the focus of the work enough. Conversely, a Bizarro Episode, Paranormal Episode, Cryptid Episode or Alien Episode might take a brief vacation from reality, but doesn't affect the series' continuity.

Compare and contrast the Masquerade, which hides the fantastical elements of the setting from Muggles (but not necessarily the viewer), and The Unmasqued World, when the Masquerade breaks down. See also Mundane Fantastic when the viewer is surprised by the reveal but characters see it as normal; Denser and Wackier, where the work gets crazier as it goes on; Later Installment Weirdness, where later story elements, format, and/or tone deviate from those of the earlier parts of a series; and Earth Drift, where the series starts off in the real world but then elements are introduced that makes it taking place in the real world not possible.