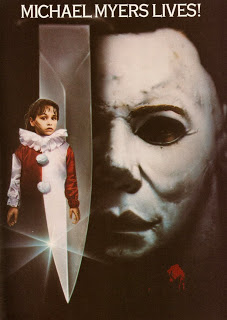 "I prayed that he would burn in hell. But in my heart, I knew that hell would not have him."
— Dr. Loomis
Advertisement:

Halloween 5: The Revenge of Michael Myers picks up right after the events of the previous film in the Halloween series, where Michael ends up shot by Illinois state troopers and left for dead. Despite those efforts, Michael Myers lives — and after a year of rest, he rises again to go after his traumatized niece Jamie (Danielle Harris) — who now shares an eerie psychic link with Michael — on Halloween, with Dr. Loomis (Donald Pleasence) once more in pursuit.

On top of Michael's continuing quest to kill his family, a new mystery shows up in the form of a man in black who watches the night's events unfold from afar...

The film is the least successful entry in the Halloween franchise, grossing a very modest $11 million, and going straight-to-video overseas. It also performed poorly with critics and audiences, sending the franchise back into Development Hell for many years before 1995's Halloween: The Curse of Michael Myers.

Halloween 5: The Revenge of Michael Myers contains examples of the following tropes: