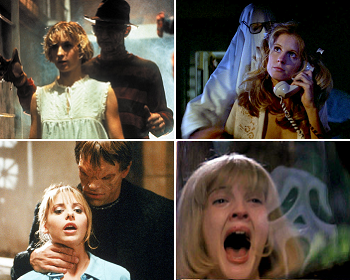 Clockwise from top left: A Nightmare on Elm Street, Halloween, Scream, Buffy the Vampire Slayer.
"Blondes make the best victims. They're like virgin snow that shows up the bloody footprints."
— Alfred Hitchcock
Advertisement:

We all know there are a large amount of tropes revolving around characters who happen to be blonde. But what about when you have the Dumb Blonde, Innocent Blonde, or Lovable Blonde in a slasher movie setting. It's almost inevitable that the blonde is going to get it. There may be a number of reasons for this but you're almost guaranteed to have a blonde getting killed off in contrast to a raven-haired Final Girlnote Interpretation says this could be due to the influence of the Dumb Blonde and Brainy Brunette tropes; the brunette is assumed to be smart enough to thwart the killer, while the blonde is Too Dumb to Live. Whether she's the Final Girl's best friend or the Alpha Bitch, her chances of survival aren't high. And God help the blonde if her best friend is Jamie Lee Curtis. This may be unintentional by the filmmakers but the blondes tend to get really elaborate deaths. As for blond males, their death rates in horror films can be attributed to a combination of other tropes.

Note that this trope only applies to horror films. It doesn't count if a blonde character happens to die in another genre.

As a Death Trope, be aware of spoilers!