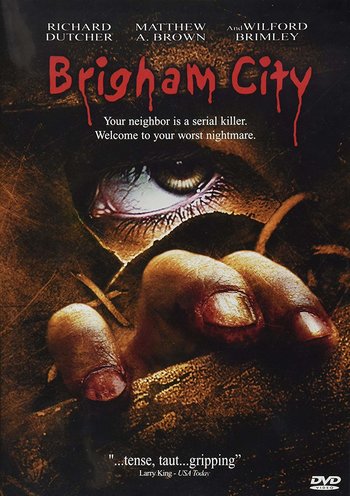 Yeah, this isn't an accurate representation of the film. It looks kinda cool, though.
"What we got here is a little paradise, and nothing attracts a serpent like a paradise."
—Stu
Advertisement:

Brigham City is a 2001 murder mystery film written and directed by Richard Dutcher.

Wes Clayton (Richard Dutcher) is the sheriff of a Utah town where nothing really happens. He also serves as the bishop of one of the town's Mormon congregations. Things start to get more exciting when Wes and his deputy Terry Woodruff (Matthew A. Brown) discover the body of a woman in a car. Wes is certain the murder isn't really his problem, and the state sends the FBI agent Meredith Cole (Tayva Patch) to investigate the case. However, the town starts to suspect there's a serial killer on the loose after the discovery of the bodies of the town's beauty pageant winner Carolyn Merrill (Jacque Gray) and Stuart "Stu" Udall (Wilford Brimley).

Determined to solve the case, Wes organizes a manhunt to find a missing girl named Jamie Harlan, going from door to door to find her. He notices the photographer Steve Peck (Richard J. Clifford) is acting strangely and suspects he might know something. The sheriff's office secretary Peg (Carrie Morgan) combs through files to see if earlier strange deaths and disappearances are connected to the killer case. Wes starts to blame himself for the situation his town is in, and resolves to stop the murderer.