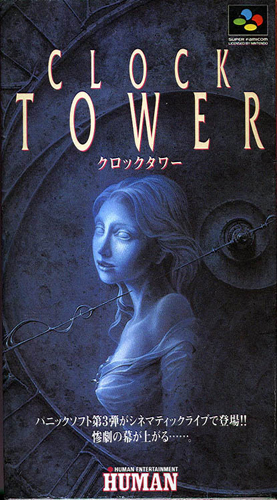 Clock Tower is the first entry in the Clock Tower series of Survival Horror video games, released in September 1995. The plot features Jennifer Simpson, a teenager living in the fictional Granite Orphanage in Romsdalen, Norway. She and her friends (also orphans), Laura, Ann, and Lotte, are adopted by a wealthy recluse named Mr. Barrows, who lives in a mansion known as the Clock Tower, named after its most predominant feature. The game was made available via SNES, WonderSwan, PlayStation, PC and the Nintendo Wii via Virtual Console in Japanese. Versions with new/updated graphics are known as Clock Tower: The First Fear.

The game immediately begins with Ms. Mary, an employee of Mr. Barrows, leading the four girls up towards the Barrows Mansion. She leaves them in the main foyer to go and tell her employer that his new adoptive daughters have arrived and takes an oddly long time of it. After the girls begin to worry, Jennifer offers to go see what's taking them. However, no sooner does she leave the main foyer than one of the girls screams. Jennifer returns to find the room dark and abandoned. She begins to explore the mansion in search of her friends, but soon finds herself hunted by a deformed, murderous little boy who wields a huge pair of scissors. The boy is Bobby Barrows, aka The Scissorman, who will be Jennifer's main stalker and tormentor for the rest of the game.

The game is well-known for its effective jump scares; every time you enter a room, there is a random chance you are either assaulted by Bobby or are faced with some environmental hazard. Sometimes, however, these events do not trigger straight away, or they might even not happen at all, which serves to very effectively build up the tension.

Jon erroneously thinks he is safe from the Scissorman's grasp after climbing up a ladder to a heightened area, only to be immediately proven wrong afterwards.

Jon erroneously thinks he is safe from the Scissorman's grasp after climbing up a ladder to a heightened area, only to be immediately proven wrong afterwards.