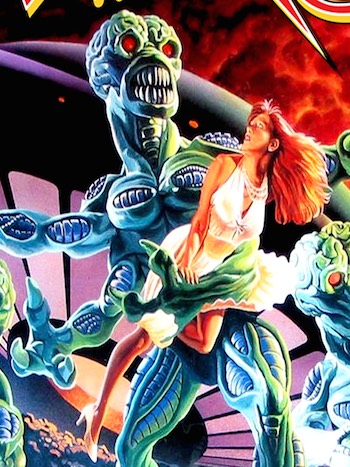 The phenomenon in B Movies from the 1950s to early 1960s in which rampaging monsters and serial killers seem to focus their "random" attacks mostly on women. Usually young, innocent, vulnerable women. Although such films may show a man or two as victims, the real focus is on the ladies. For instance, if the movie includes a montage of attacks, expect every victim shown to be female.

This seems to be a wide-scale application of the Disposable Woman concept, sans any significant connection to The Hero. Further, the deaths carry no more than the normal dramatic weight, and do not motivate the Hero to action any more than would male deaths. All other things being more or less equal, the director will simply choose to populate his movie with female victims. And then, of course, there are plots in which the killer will specifically target females.

One would assume, in this age of equal rights and feminism and all, that this would be a Discredited Trope or even a Dead Horse Trope. But no, the trope is alive and well. Apparently, the sight of women being terrorized on screen is just more... um... titillating. Or a good way to show just how evil your monster is by attacking poor defenseless girls. Also don't forget that Girls Are Really Scared of Horror Movies. Either that, or it's because this is Truth in Television for some monsters of the human variety, as serial killers target women much more often than men (especially when there's a sexual component to their murders). Ted Bundy, Ed Kemper, Gary Ridgway, and Jack the Ripper killed women exclusively, or nearly so.

This trope does carry some Unfortunate Implications about women's safety compared to men's. A very common real life misconception about murder is that women are more likely to be murdered then men, and that the world as a whole is more dangerous for women then men. In reality, whilst serial killers tend to target women, 70% of murder victims in general are male and out of the 30% of female victims, most are killed by someone she knows. Plus, serial killers are extremely rare compared to other types of murderers, despite some media suggesting otherwise.

As a direct result of this trope, many slasher movies have a Final Girl (and one with no form of self-defense training at that), since audiences are somehow more likely to root for a young, nubile, defenseless (and most often white) woman on the run from a psychopath who gutted her friends like fish, as opposed to a man in a similar position.

If the women are abducted rather than killed, it's probably because Mars Needs Women. See also Distressed Damsel, Monogender Monsters, Naughty Tentacles, Touch of the Monster and Dragons Prefer Princesses. Men Are the Expendable Gender can either avert or invert this, depending on the hostility towards the gender—though on a meta level, that trope can contribute to the decision to use this trope if a creator makes the victims female so the attacks look more shocking. For a type of female monster that does this, see the Lesbian Vampire. For the inverse, see Literal Maneater.