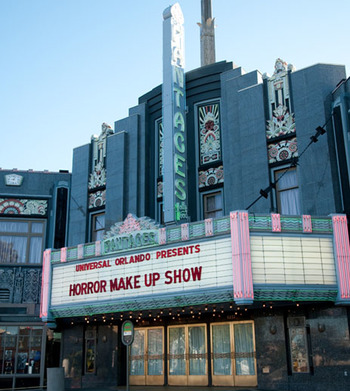 Universal's Horror Make-Up Show is a comedic behind-the-scenes presentation that's located at Universal Studios Florida. Opening with the park on June 7, 1990, the show remains as one of the few original attractions to still be operating to this day.

The show features two hosts, the first being Alex Ross, who soon then introduces the Special Guest host, Mark James (or Marty James, if a woman is playing the part), who is said to be a professional Hollywood makeup artist. Together, they discuss how make-up appliances are used in the Horror film genre to create the effects of blood and gore, as well as the appearances of many famous movie monsters. In particular, they mention the works of several famous horror makeup artists, such as Lon Chaney, Jack Pierce, and Rick Baker; along with discussing how the elaborate effects were done for films like the Universal Classic Monsters series, An American Werewolf in London, and The Mummy (2017). On top of everything, Hilarity Ensues throughout the show via the hosts' various antics.

When the show first started up, it was known as The Phantom of the Opera Horror Make-Up Show and featured a pre-show with the famed phantom, but over time was changed to put the focus on all of the horror genre. The show itself has also gone through a few changes, with the films discussed and featured being swapped out over time to remain up-to-date.