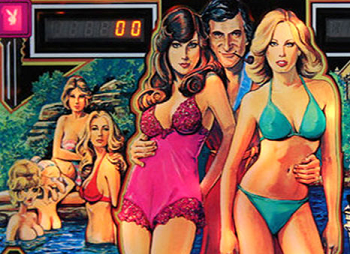 Hugh Hefner knows how to accessorize.
You know him. The fabulously wealthy guy, who rubs shoulders with the rich and famous, the movers and shakers of industry, and may even have connections in the political arena. The one sitting on top of more capital than most people can imagine and more than they themselves will ever be able to spend in a lifetime. Add dashing good looks, boyish charm, swank suits, lavish living, weekend excursions on the Rio Grande or the Virgin Islands and it's no wonder they're regarded as part of the "jet set".
Advertisement:

The combination of wealth, power, and charisma draws women to them in droves — and he exults in it, because he can have his pick among supermodels and starlets. Even if he's the type to love 'em and leave 'em, he knows there'll always be another to take their place, ensuring you'll never get as much action as he does.

In spy thrillers and heist films, they may be part of a Caper Crew. Usually as the one covering the group's expenses, and just as likely to use their connections to bail the team out of a tight spot, should it become necessary.

Ones with fighting skills are likely to be Cultured Badasses. Or, if they're moonlighting as a superhero, or secret agent see Rich Idiot With No Day Job. For villainous examples see Man of Wealth and Taste.

Spear counterpart to the Socialite.