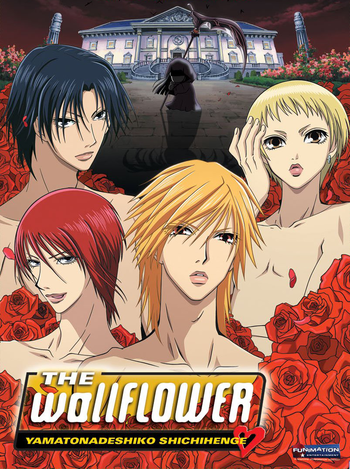 The Wallflower (Japanese title: Yamato Nadeshiko Shichi Henge, or "Perfect Girl Evolution") is a shoujo manga by Tomoko Hayakawa, which ran in Bessatsu Friend from 2000 to 2015.

The story is about Sunako Nakahara, whose first love, in response to her confession told her "I don't like ugly girls". In response, she took to shunning light forever, hiding her face behind long black hair and devoting her life to horror, gore and darkness. That is, until her well-meaning but melodramatic rich Aunt sets Kyohei, Oda, Yuki, and Ranmaru — her harem of teenage Bishōnen — on Sunako with the task to turn her into the perfect lady. In exchange for this, they will get free accommodation in her Big Fancy House whilst the Aunt jets around the world in search of her true love. If they fail, they must pay triple rent for the accommodations they have used. (With the costs of housing in Japan, this is a dire penalty indeed.)

Unfortunately for the boys, Sunako has absolutely no intention of playing along with them. She's a Creature of Darkness and damn well proud of it. The issue is made worse because she can't look at "Bright Creatures" like them without getting a nosebleed, and this predictably puts some stains on their relationship.

Though she can eventually deal with living with the other three, Sunako and Kyohei's relationship isn't the best, resulting in some early murder attempts on Sunako's part, lots of bickering, fighting, occasional saving each other and...you guessed it, everyone in the cast trying to set them up.

The manga received a 25-episode anime adaptation which aired from 2006 to 2007. The anime is directed by Shinichi Watanabe (Nabeshin from Excel Saga) who makes cameos as various side characters and... totem poles?

A live-action version began airing in January 2010, and finished airing with 10 episodes.

Warning: The manga, at least, is completely food-obsessed. You will probably get hungry reading it.

This page is for all examples from the manga/anime/drama.