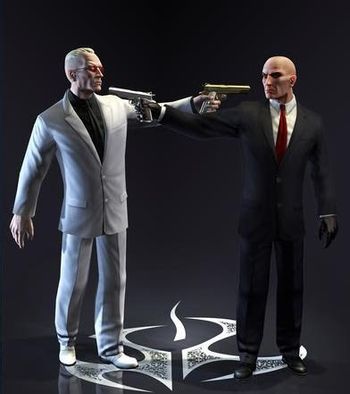 Send a killer to catch one.
Advertisement:

Hitman: Blood Money (2006) is the fourth game in the Hitman series by IO Interactive.

Our narrator is former FBI director Alexander Cayne, the man who claims to have caught and killed "Mr. 47." The timeline is full of false leads and near-misses, but he finally bagged 47 during an attempt on the U.S. President's life. As he relates his story, we flash back to the Paris opera, where 47 was gravely wounded before fleeing Europe.

After a pit stop in Chile, the manhunt picks up in the United States, beginning with a minor hit in Baltimore and zig-zagging its way across the country: first a visit to California to rub out some mobsters, and onward to a political rally in New Orleans, a Christmas party in the Rockies, the swamps of Mississippi, the underbelly of Las Vegas, and finally the Oval Office itself.

It was a radical change from previous Hitmans, as the series moved away from its PC gaming roots. The fixed camera is gone, allowing much greater mobility than before. The difficulty is also more balanced: 47 sneaks faster than in prior games, and guards aren't quite so anal about disguises. (They won't bust you for carrying the wrong make of gun, and strolling is no longer part of a disguise.) A new way to keep your low profile is to make hits look like "accidents", such as rigging a grill to explode, or shoving targets off high ledges. Bodies found as a result of accidents do not count toward your total. Among other improvements:

Blood Money also has an unusual newspaper feature. Each time you finish a mission, you will see a headline with all the details of your mission. When your "notoriety" level is at a minimum, you can enter levels normally. The higher your notoriety level, the harder it is for 47 to blend in. Notoriety increases when you leave witnesses to your crime alive or un-sedated, or you get caught on CCTV cameras and don't destroy the evidence.

Originally released for PC, Playstation 2 and Xbox, the game has been remastered twice: first for the Hitman HD Trilogy for PS3 and Xbox 360 in January 2013, which contained this game, Contracts (a semi-remake of the first game), and Hitman 2: Silent Assassin, all of which received the standard HD remaster treatment. In January 2019, the game and its sequel (Hitman: Absolution) were also made available on the PS4 and Xbox One in the form of Hitman HD Enhanced Collection, which upgraded the games to 60FPS 4K resolution, among other graphical improvements.

Baltimore: "Death of a Showman"

A few years prior, a ferris wheel at the Southland Amusement Park in Baltimore, Maryland collapsed, killing 36 people. The park's owner, Joseph "Swing King" Clarence, was sued for negligence, but was acquitted of all charges. The father of a teenager killed in the accident hires 47 to eliminate Clarence, whose bankruptcy has led him to allow a local gang to use the decrepit park as a drug lab, while also showing Clarence a photo of the teenager before killing him.

Chile: "A Vintage Year"
47 heads to the Colchagua Valley, Chile to eliminate Don Fernando Delgado, a former colonel in Pinochet's regime currently running a cocaine ring out of his vineyard. To make the assassination appear to be a drug-related hit, 47 must also take out Delgado's son, Manuel.
Paris: "Curtains Down"

To the public, Alvaro D'Alvade is a renowned opera actor. In private, he is behind a child prostitution ring in Europe. 47 is sent to an opera house in Paris to eliminate D'Alvade, who is currently rehearsing Tosca, as well as his friend and biggest customer, disgraced US ambassador Richard Delahunt.

Days prior, Agent Carlton Smith had been sent to the Pine Cone Rehabilitation Clinic in Northern California to identify three mobsters, one of whom is due to turn state's witness. Smith has not been heard from in days, apparently being kept drunk to prevent him from escaping. As the clinic only discharges dead patients, Diana provides 47 with an experimental serum that will put Smith into a death-like state and allow him to be discharged. 47 must also identify the identity of the mobster and eliminate him and potentially two other mobsters.

California: "A New Life"
47 is sent to a gated community within Del Mar, San Diego, to eliminate former Cuban crime lord Vinnie Sinistra. Sinistra is due to testify against his former partners next month, and is being kept under witness protection. 47 must also collect a piece of microfilm containing the evidence.
New Orleans: "A Murder of Crows"
The American Secretary of the Interior, Jimmy Cilley, is being targeted at a Mardi Gras parade in New Orleans, by a gang of assassins called The Crows. 47 must protect Cilley by eliminating the assassins - Clone Mark Purayah II and his two associates, former Olympic biathlete Raymond Kulinsky, and Kulinsky's wife Angelica Mason.
Colorado: "You Better Watch Out"
US Senator Chad Bingham is being blackmailed by pornography tycoon Lorne de Haviland, who has footage of Bingham's son Chad Bingham Jr. killing a girl during a rough sexual tryst. Not wanting the scandal to cost Bingham his re-election campaign, 47 is sent to a party in de Haviland's mansion in the Rocky Mountains to eliminate both Bingham Jr. and de Haviland, and to retrieve the tape.
Mississippi: "Death on the Mississippi"
47 is sent to wipe out six members of the Gator Gang, a drug distributing group operating on a steamboat in the Mississippi River, as well as the gang's leader and ship captain Skip Muldoon. He must also collect incriminating photos located in Muldoon's safe.
Mississippi: "Till Death Do Us Part"
Staying in Mississippi, 47 must eliminate Blue Claws leader Pappy LeBlanc and Muldoon's son Hank Leitch "Buddy" Muldoon. Buddy has married Pappy's daughter Margeaux LeBlanc and is holding a private ceremony at the LeBlanc's plantation house. The client also requests that Margeaux is kept alive.
Las Vegas: "A House of Cards"
47 is sent to the luxurious Shamal Casino in Las Vegas to eliminate three targets - South African white supremacist Henrik Schmutz, who is about to trade DNA material to pharmaceutical CEO Sheikh Mohammed Bin Faisal Al-Khalifa and his chief scientist, Tariq Abdul Lateef.
Las Vegas: "A Dance With the Devil"
As part of his final ICA assignment, 47 infiltrates a masquerade party at the nearby Shark Club. He must take out Romanian arms dealer Vaana Ketlyn and rogue CIA agent Anthony Martinez. The Franchise has also sent two assassins whom 47 must also eliminate.
Washington DC: "Amendment XXV"
After finishing his final assignment, 47 is encountered by Agent Smith in his getaway van, who informs him that the President of the United States, Tom Stewart, is about to be assassinated. The man behind the assassination is the acting Vice President, Daniel Morris, who is co-operating with Franchise assassin and clone Mark Parchezzi III to eliminate Stewart. 47 must infiltrate the White House and take out both Morris and Parchezzi.
Unknown: "Requiem"
Tracked by The Franchise and the police, 47 is visited by Diana in his hideout, offering a way of escaping them. While distracted, Diana injects him with a syringe, seemingly killing him, and joins The Franchise. She then joins Alexander Cayne and Rick Henderson at his funeral, where 47 is due to be cremated for his bone marrow. It turns out that she has actually injected him with the same death serum he had used on Smith, which kicks in just as the funeral starts. Once awake, 47 must leave no witnesses and eliminate everyone at the funeral.