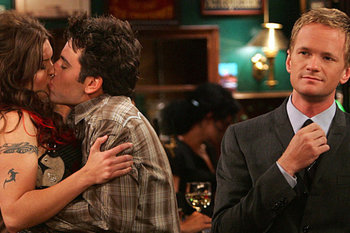 Two heads are better than one, as the old saying goes, and it can apply to courtship as easily as anything else. A common strategy is for a character to enlist a friend to assist him in his romantic endeavors. This "wingman" can build the character up as a sort of romantic hype man

, offer advice, impartial feedback, and moral support, and run interference to distract friends of the Love Interest who might otherwise serve as walking Moment Killers. The fact that the wingman may wind up experiencing romantic success with such friends serves as an important fringe benefit. Can sometimes overlap with Expectation Lowerer when the wingman is meant to contrast their friend's good traits with their own bad ones, although for obvious reasons few wingmen do this intentionally.

As being a wingman can be seen as a subordinate position akin to a sidekick, there can sometimes be conflict over who is wingman to whom, or whose "turn" it is to act as wingman. On the other hand, Happily Married characters often enjoy acting as wingmen for their single friends as a way of vicariously recapturing some of the enjoyment of single life.

As the name implies, wingmen are traditionally male and assist male friends. In modern works, however, it is increasingly common for female characters to employ female wingmen or "wingwomen." In addition to the other functions of a wingman, such wingwomen are also sometimes asked to help deflect the attentions of undesirable suitors who are disinclined to take "no" for an answer. This can sometimes bring them into conflict with the suitor's wingman, who is tasked with distracting them. It can also sometimes bring them into conflict with the friend they are tasked with assisting if the friend finds herself inclined to leave with a suitor that the wingwoman considers unworthy of her friend's attentions.

Men also sometimes enlist female wingmen with whom they are Just Friends. This has the advantage of what is called "social proof" or "preselection," the theory that some women perceive a man in the company of another attractive woman as more attractive himself. A common variant is for a straight man to work with a lesbian wingwoman, with the understanding that if a prospective paramour turns out to be a lesbian as well, the roles will switch and the man will assist the woman in wooing her.

Male wingmen assisting straight female characters are less common; the Gay Best Friend often offers romantic advice, but seldom offers the "in the field" support of a true wingman, perhaps because men are likely to perceive the presence of another man as a rival. The opposite— a Fag Hag winging for the Gay Best Friend— is sometimes attempted, but more often she acts as The Matchmaker instead. Gay characters acting as wingmen for other gay characters are also uncommon in fiction, perhaps because few works that are not explicitly gay-focused have more than one gay character.

Another common variation is to enlist a baby or animal to put the Casanova (or would-be Casanova) in a favorable light and serve as an easy topic of light conversation. For these, see the subtropes Pick Up Babes With Babes and Animal Chick Magnet. Like its subtropes, this trope is Truth in Television and is often seen in Real Life. Less often seen in Real Life is Playing Cyrano: a wingman putting words directly into a friend's mouth.

The slang term "wingman" comes from the fellow who guards the back of an Ace Pilot in combat, which is its own, otherwise-unrelated trope: Wingman.

Compare The Matchmaker, who helps (or attempts to help) multiple parties find love as opposed to focusing on just one close friend, and Shipper on Deck. Contrast the Shipping Torpedo.

SpongeBob gets the tongue-tied Squidward a date with his crush.

SpongeBob gets the tongue-tied Squidward a date with his crush.