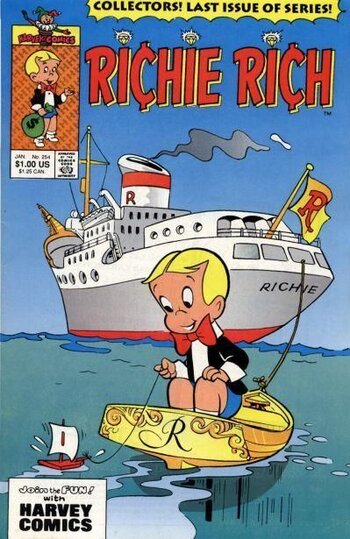 Pearl: This ship... It's the same one I got for my sixth birthday!
Marina: I knew you grew up rich, but geez!
— Splatoon 2
Advertisement:

Most financial experts say that buying a boat is one of the biggest wastes of money there is—aside from the initial cost of buying the boat itself (obviously), boats are typically very expensive to maintain, insure and fuel (marine engines can be serious gas hogs). And aside from all of that, you also have to take the cost of stuff like dock fees and boating accessories into account as well as the fact that, unless you're a serious boating enthusiast (or at least live in a place where you can use it on a regular basis), most boat owners really only use their boats a few times per year (and mostly just during the summer months). Hence why people say things like "Boat: A hole in the water into which money is poured" or "BOAT: Bust Out Another Thousand."

So how do you instantly establish that a character is filthy rich? Show them in the possession of a luxury yacht that's easily worth several million dollars.

Compare Upper-Class Equestrian, since horses are also expensive to own and maintain, and so horseback riding for leisure is similarly used as a hobby for the wealthy.