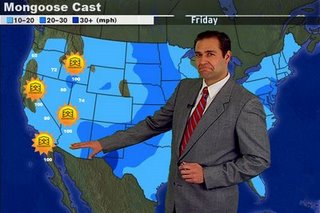 You've seen it. Possibly even in real life. There's a man, or a (generally attractive) woman, standing in front of a green screen, telling you what the weather will be like just before the News Broadcast ends. Characters will check this if they're going camping, fishing, or what have you.

If the weather is incorrect, it is generally played for laughs, either with a Disproportionate Retribution episode, or with the characters insisting to go fishing when it's pouring buckets anyway. You may even get someone insisting that it is such a beautiful day.

If the weather is correct, chances are that the weather is horrible (occasionally cue "Oh, like he's ever right.") or that this signals the end of the episode/movie/book. Blue skies, lovely weather predicted and it's correct? Time for your happy ending.

Not to be confused with the jazz fusion band of the same name.