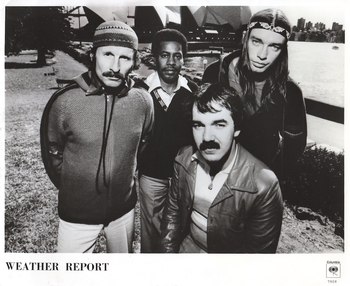 Weather Report was a jazz fusion band, formed by the only two consistent members, keyboardist Joe Zawinul and saxophonist Wayne Shorter, in 1970. The rest of the lineup was a Revolving Door Band, but several of the members are well-known on their own, most notably world-class bass virtuoso Jaco Pastorius.

In the beginning, they played Miles Davis - inspired free jazz (Shorter and Zawinul had both played on Davis' albums In a Silent Way and Bitches Brew), and gained attention for Zawinul's innovative use of synthesizers (he was one of the first to use the instrument in jazz) and influences from everything from bebop to world music. They soon moved into a sound more oriented around funk, and shifted away from improvisations into a more melodic and thought-out compositional style, mostly dominated by Zawinul.

Their greatest success came with the arrival of Jaco Pastorius in 1976, and the album Heavy Weather, which reached #1 on Billboard's jazz charts and provided their Signature Song, "Birdland". This also signalled their shift into a more rock-oriented and commercial style, which made them one of the leading jazz bands in the world. Unfortunately, Zawinul was developing increasing Control Freak tendencies, composing everything on his synthesizers and dictating their musical direction completely. Friction rose within the band, and Pastorius left in 1982. The band continued a while longer to diminishing returns, until the band members felt that they had more freedom in their own projects, and Shorter's increasing distance from the band led Zawinul to split them up in 1986. Pastorius died in 1987; Zawinul himself passed away in 2007. Another former bassist, Victor Bailey, died in 2016.