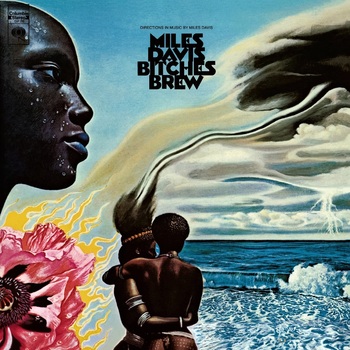 "When you're creating your own shit, man, even the sky ain't the limit."
"The word 'bitches', you know, probably that was the first time a title like that was ever used. The title fit the music, the cover fit the music."
—Teo Macero
Advertisement:

Bitches Brew is a double album by Miles Davis, recorded from August 19 through 21, 1969, and released in early 1970, and widely considered one of the most revolutionary albums in jazz history, alongside Davis' Kind of Blue. While it wasn't the first album mixing rock and jazz, or even Miles' first album using electric instruments, it's often seen as the Trope Codifier for Jazz Fusion, mixing traditional jazz instruments with electric guitars and keyboards improvising over long, funk-inspired rhythms, inspired by contemporary artists like Jimi Hendrix and Sly and the Family Stone. It also qualifies as the Genre Popularizer, as it sold quite a bit better than any previous work in the genre.

Despite this, it is a dark and unsettling album, befitting its title; it's quite dissonant, and most songs have an unsettling atmosphere, as though something is slightly out of place. Miles' other major fusion works from this period, In a Silent Way (also 1969) and A Tribute to Jack Johnson (recorded 1970, released 1971), are quite a bit brighter, with less usage of dissonance and more usage of major keys, and may be better places for timid listeners who are curious about Miles' fusion period to start.

Directions in tropes by Miles Davis: