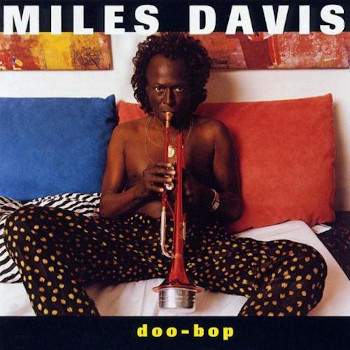 Doo-Bop is a jazz-rap/acid jazz album by Miles Davis. Released on June 30, 1992 on Warner (Bros.) Records, it was the last studio album the legendary trumpeter worked on prior to his death in 1991.

While staying in New York during a particularly hot summer, Miles typically had his apartment window open, and frequently heard teenagers blasting Hip-Hop, particularly the music of Def Jam Recordings, out of their boomboxes, but none of his music. Miles then decided he wanted to make an album that captured the sound of hip hop; though that decision isn't too surprising if you knew that one of his favorite albums at the time was Paul's Boutique. Calling up his friend and Def Jam owner/co-founder Russel "Rush" Simmons, Miles asked him to find some young hip-hop producers to help him create the sounds he wanted. Simmons proceeded to send Miles a stack of beat tapes from some of his best producers, including Chuck D and Flavor Flav, but the standout among them was a relatively-unknown producer by the name of Easy Mo Bee, who was also part of a group called "Rappin' Is Fundamental".

Davis and Mo Bee recorded and produced the majority of the album between January and February 1991, with Mo Bee and his R.I.F. bandmates providing their "doo-hop" sound to the album by contributing both rap and doo-wop influenced vocals, which inspired the album's eventual name of "Doo-Bop". Davis took a break from recording to tour and perform, including a performance at the 1991 Montreux Jazz Festival that would become Miles & Quincy: Live at Montreux, but died from a stroke later that year. At that point, only six tracks had been finished during the recording sessions, so Warner Bros. gave Mo Bee some of Miles' unreleased "RubberBand" recordings (which, according to Mo Bee himself, came from unreleased sessions Miles had with Prince) to make two more tracks "Miles would have loved" to finish the album.

Doo-Bop was released posthumously in 1992, and was mostly received negatively by critics, but nonetheless managed to win a Grammy for "Best Instrumental R&B Performance" in 1993; netting Miles his seventh and first posthumous Grammy. As for Mo Bee, he would continue to build his name by producing for future legends RZA and GZA, before breaking into the mainstream as the main producer of both The Notorious B.I.G.'s Ready to Die and Craig Mack's Project: Funk Da World in 1994. Davis would see one more posthumous album release with Rubberband in 2019, 27 years later.

* = Tracks that were made posthumously.