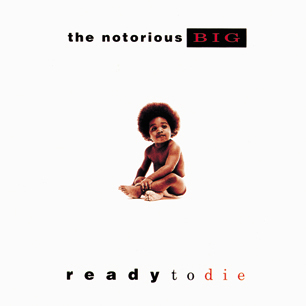 It was all a dream...
Damn, what happened to the summertime cookouts?
Every time I turn around, a nigga getting took out
Shit, my Momma got cancer in her breast
Don't ask me why I'm motherfuckin' stressed
Things done changed...
—"Things Done Changed"
Advertisement:

The album is in part a semi-autobiographical (and exaggerated) account of Biggie's younger days as a criminal, and consists of mostly hardcore gangsta rap, with a few light party jams (the most popular being the first single "Juicy", although the second single, "Big Poppa", is no slouch either).

It went on to become one of the biggest-selling hip-hop albums of all time, helping revitalize the East Coast hip-hop scene commercially in the face of the West Coast's dominance in the early 90s. Three of its songs - "Juicy", "Big Poppa", and "Warning" - went on to become singles, accompanied by music videos.

Sadly, Ready to Die was the only album Biggie saw the release of during his lifetime - he was murdered in Los Angeles just 16 days before the release of his second album, ironically named Life After Death.

XXL Magazine has an in-depth, track-by-track article about the making of Ready to Die, available right here.

(The tracks marked with an asterisk were included on "The Remaster" re-issue of the album.)

"I love it when you call me Big Tro-pa! Throw your hands in the air, if you's a true playa..."