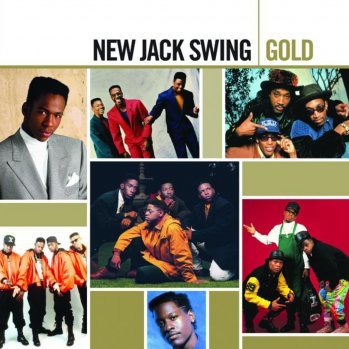 And these are only a fraction of the hitmakers. Top: Bobby Brown, Guy, Tony! Toni! Toné!. Center: Boyz II Men. Bottom: Jodeci, Johnny Gill, Bell Biv DeVoe.
New Jack Swing is a fusion genre of R&B, Hip Hop, Disco and Funk that was created in the mid-eighties by a variety of African-American artists and producers. There's been debate as to who actually started it, but most fans of the genre agree the blueprint started with three music producers: The Minneapolis-based Flyte Tyme team (Jimmy Jam & Terry Lewis) and Harlem, New York-based Teddy Riley.
Advertisement:

Many of Teddy Riley's earliest productions for New York based rappers such as Slick Rick and Kool Moe Dee were noted for their unique swinging beats and melodies, which were uncommon at the time in hip hop. Meanwhile, Jam & Lewis, after being sacked from The Time by Prince in 1983, took the "Minneapolis sound" made famous by their former boss and added smoother R&B stylings and hip hop influenced drums, using this style to create hits for the SOS Band, Alexander O'Neal and Cherelle. But it was Control, their 1986 collaboration with Janet Jackson that created the musical style that would eventually be known as "new jack swing".

The timeline of the new jack swing era's peak years is generally agreed to have coincided with the The Golden Age of Hip Hop (1987-1994), with the first true new jack album being Keith Sweat's Make It Last Forever, released in November 1987. During its peak years, R&B and hip hop artists alike flocked to to the new jack sound, with varying degrees of success. Male artists such as Al B. Sure!, Bobby Brown and Big Bub were given a more "streetwise" edge thanks to the genre's hard hitting drum beats, while rappers jumped on it to appeal to a wider audience (or, in the case of LL Cool J, be more effective at making rap ballads).

By the early 1990s, New jack swing had hit its ultimate peak. Movies like New Jack City and House Party were influenced by the sound and style it had created, and Japanese video game composers such as Yuzo Koshiro, Masato Nakamura, Naofumi Hataya and Tomoko Sasaki were using new jack influences in their compositions. Not even Michael Jackson could turn a blind eye at its popularity, and enlisted Teddy Riley's services for Dangerous, and Jam & Lewis' later for HIStory: Past, Present And Future, Book I. The genre even crossed over to Korea and Japan of all places, influencing a great deal of K-Pop and J-Pop artists, such as Park Mi Kyung, and Toshinobu Kubota, respectively.

Of course, with its popularity, backlash was inevitable. Many hardcore and alternative rappers had taken shots at new jack swing rappers for "whitewashing" the core message of hip hop just to get radio airplay. One such insult from A Tribe Called Quest on their track "Jazz (We've Got)" led to new jack rap group Wreckx-N-Effect beating the holy hell out of Tribe member Q-Tip outside of a New York nightclub. And while new jack swing remained popular into the early nineties, Grunge and G-Funk soon overtook it, being considered the more "authentic" sound than the pop-influenced R&B sound of new jack swing.

By 1995, the new jack sound was considered outdated by many, but the genre still survived until 1997, succeeded by its spiritual successors Hip Hop Soul and Neo Soul, which remain popular today. The last hit single to use the classic new jack swing sound was Michael Jackson's "Blood On The Dance Floor", released in 1997. Despite its decline in the US, it remained moderately popular in Asia, continuing to inform pop and video game music to an extent up through the early 2000's, rubbing off a bit on western composers as well during that time.

in 2006, as well as VH1's Hip Hop Honors paying tribute to the genre in 2007. The New '10s saw the genre make a return to the charts, with Paramore's "Ain't It Fun" and Bruno Mars' "That's What I Like" and "Finesse" all hitting the top ten of the Billboard Hot 100 between 2014 and 2018. New jack swing also made its return to mainstream video games with the release of Sonic Mania in 2017. New jack swing's heavy influence on K-Pop also helped fuel it's revival further during the western K-Pop boom of the 2010s. Coincidentally, Teddy Riley himself personally had a hand in producing for several K-music acts during this period.

of all the artists who've dabbled in New Jack Swing at one point or another.