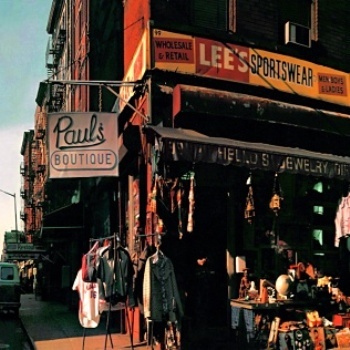 You be listenin' to my records', a number one sound/ Step to the rhythm, step, step to the rhyme/ I've got an open mind so why don't you all get inside?
"Don't go anywhere without it. It's one of those records that you buy every time you're in a rental car. It's also one of those records that you thought sucked the day you bought it. You were mad because it sounded nothing like Licensed to Ill. Then a month later, you're like, 'This is the best shit ever. "High Plains Drifter" is the best song ever made.'"
—Chris Rock, who placed "Paul's Boutique" on nr. 8 in his personal list of 25 Best Hip-Hop albums, published in Rolling Stone, 2006.
Advertisement:
"The dirty secret in the rap community is that Paul's Boutique has the best beats."
—Chuck D.

Paul's Boutique is a 1989 album by The Beastie Boys, second in their catalog and the Even Better Sequel to their already promising debut Licensed to Ill (1986), which had made the band synonymous with pubertal party boy music. This image eventually hung like an albatross around their necks, mostly due to people who didn't get the satire. Perceiving their debut as an Old Shame the Beastie Boys decided to make their next album more mature and put the focus back on their musical skills. They even vetoed the idea of promoting the record, assured by the idea that their true fans would find it in the stores and appreciate the record on its own merits, alienating all the people who didn't look further than their frat house gimmick.