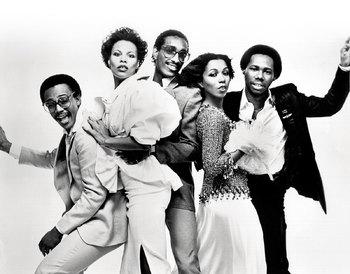 From the left: Bernard Edwards, Alfa Anderson, Tony Thompson, Luci Martin and Nile Rodgers.
"Have you heard about the new dance craze?
Listen to us, I'm sure you'll be amazed,
Big fun to be had by everyone,
It's up to you, It surely can be done."
"Le Freak"
Advertisement:

One of the key groups in the Disco genre. Formed in New York in 1976 by Bernard Edwards (bass) and Nile Rodgers (guitar), they recruited drummer Tony Thompson and vocalist Norma Jean Wright to make a self-titled debut album which included the hits "Dance Dance Dance (Yowsah Yowsah Yowsah)" and "Everybody Dance". Wright went solo and Chic continued with Edwards stepping up to the microphone and joined by various other vocalists including Alfa Anderson, Luci Martin (who sang lead on most of the singles) and Fonzi Thornton. A young Luther Vandross was a back-up singer.

Rodgers and Edwards were the group's songwriters and producers; both went on to produce other acts, most notably Sister Sledge (of "We Are Family" fame) and David Bowie. Rodgers' work with Bowie is especially crucial to note, as he credited 1983's Let's Dance for helping him break free of the stigma against disco music and anything that sounded vaguely like it in the early 1980's, writing extensively about the experience and its impact in a 2018 essay included in the booklet for Bowie's posthumous Loving the Alien [1983-1988] Boxed Set. Since then Rodgers has been an in-demand producer and collaborator for a wide variety of artists, and even reunited with Bowie in 1992 to produce the latter's Career Resurrection album Black Tie White Noise, released the following year.