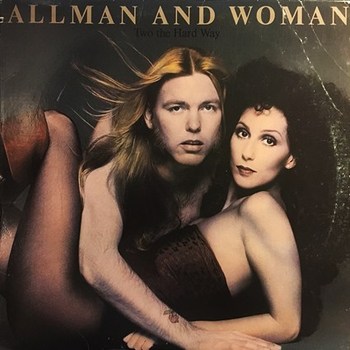 "We gonna make it, I know we will."
Peter Griffin: Gregg Allman, how did you handle it when life got you down?
Gregg Allman: Me? I did a lot of drugs and married some broad named Cher; I wouldn't recommend either one of them.
— Family Guy, "Let's Go to the Hop"
Advertisement:

Two the Hard Way is the side project from Cher and Gregg Allman. The album is half covers and half original songs, all but two of them are duets.

Most people seem to agree in hindsight the album was a mistake, with many sighting Gregg's Southern Rock and Cher's idiosyncratic, personality-driven pop not going well. The album is considered an Old Shame and Cher and Gregg Allman would break up shortly after its release.