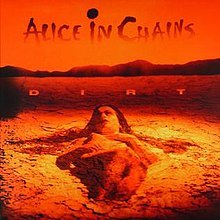 "Into the flood again…"
Advertisement:

Dirt is the second album by famed Alternative Metal/Grunge band Alice in Chains. (Although it’s much better known then their first.) It was released on September 29, 1992, and recorded from April-July of the same year.