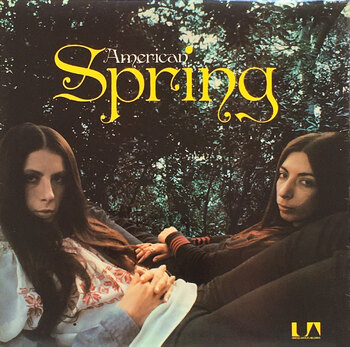 Spring is the debut and sole album by American Spring. Released in 1972, it features a mix of Beach Boys covers, Bril Building pop covers, and originals.

The album is known for being affiliated with Brian Wilson since he is credited as its executive producer (on top of being the husband of Marilyn Wilson, one half of American Spring, back then). However, he produced only a handful of tracks, and the rest was carried over by David Sandler and Beach Boys sound engineer Stephen Desper. Spring was initially conceived during the recording of The Beach Boys' Sunflower, after Brian met David through Bruce Johnston. They kept in touch and later recorded some songs back in Brian's home studio at a moment where Marilyn wanted to continue making music with her sister Diane, following the dissolution of their Girl Group trio The Honeys. The recording happened between 1970 and 1971, at the same time as The Beach Boys' Carl and the Passions – "So Tough".

Spring went unnoticed following its release despite critical acclaim. It is now a sought-after collectible item, on top of being an interesting Beach Boys-related project for fans of the band.

Reissues of the album would also feature some outtakes as bonus tracks: "Shyin' Away", "Fallin' In Love", "It's Like Heaven" and "Had to Phone Ya".