Music / Carl and the Passions  "So Tough" 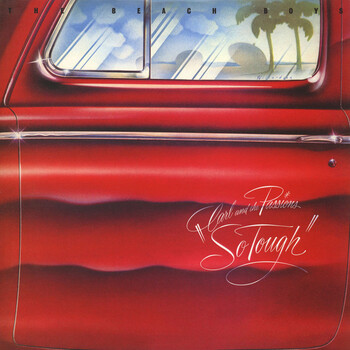 I need a spark by a fire/ To stop the cold of my winter/ I need a burst of your raindrops/ To keep a flow in my river/ I need a call for my phone will ring/ I need your song for my voice will sing.
Advertisement:

Carl and the Passions – "So Tough" is the eighteenth studio album by The Beach Boys, released in 1972. It is their first album with Blondie Chaplin and Ricky Fataar, and the first since the departure of Bruce Johnston — although he appeared on "Marcella" before he quit. As a result, this is the Beach Boys album with the most members, with every member they ever had bar David Marks officially appearing on this album. Johnston would rejoin The Beach Boys permanently in 1978. This album is a major New Sound Album, to the point where the casual fan would not realise this is The Beach Boys if they are not told who this is by. Elton John is a known fan of this album, citing it as his favourite by The Beach Boys.

The title of this album is a Shout-Out to a band Carl Wilson was in when he was a teenager. Upon release, this album was a moderate success commercially and received generally positive reviews. However, in the US it was paired with Pet Sounds, which indicated the lack of confidence their record company, Reprise Records, had with this album. Reprise would later reissue Pet Sounds on its own.

Fan favorites include "You Need a Mess of Help to Stand Alone", "Marcella", "All This Is That" and "Cuddle Up".

You Need A Mess Of Help To Trope Alone: