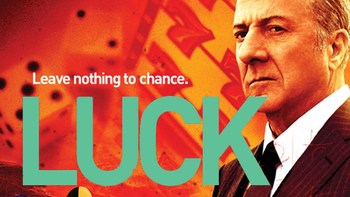 David Milch (of Deadwood and NYPD Blue) returns to HBO with his typical idiosyncratic view of humanity. His subject this time is a racetrack, where trainers, jockeys, gamblers, and others all coalesce in an experience like no other.
Advertisement:

The series begins with Chester "Ace" Bernstein (Dustin Hoffman) being released from prison, with his record meaning he can no longer own a racehorse. But he just gets his bodyguard Gus to buy one for him, and prepares to use the winnings to establish a casino nearby. Also, a quartet of self-described degenerate gamblers have figured out a new way to play the odds that could mean endless riches, and the drama between a new jockey, his agent, and his boss adds to our view of what goes on behind the scenes of the sport that makes the whole thing tick.

The series was cancelled after one season due to a series of high-profile horse injuries/deaths.