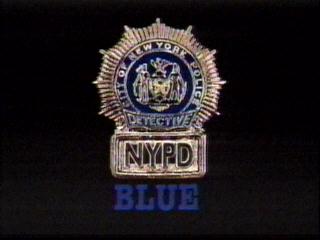 NYPD Blue is a Cop Show with Soap Opera elements that ran on ABC from 1993 to 2005. Originally a star vehicle for David Caruso (who left after the first season to pursue a movie career), the show evolved into an ensemble, with Det. Andy Sipowicz (Dennis Franz) as the focus character.

The show courted controversy from the start with its liberal use of nudity (mostly sideboob and butts, with the occasional steamy love scene) and salty language (one of Sipowicz's first lines is calling A.D.A. Sylvia Costas a "pissy little bitch", and it was one of the first shows to use the word "shit" on network television). The Parents Television Council was formed primarily because of this show. It was also noted for resurrecting the careers of those (besides Caruso) who played Andy's partners (Jimmy Smits, and former child stars Rick Schroder and Mark-Paul Gosselaar)

The show was created by producer Steven Bochco, and is considered the Spiritual Successor to his earlier, similarly ground-breaking ensemble cop show, Hill Street Blues.

In October 2018, it was announced that a revival is under development. This revival is stated to feature a new generation of detectives, and the revival will center on Andy Sipowitz’s son Theo, as he will earn his detective shield so he can investigate his father's death. As of 2019, the revival idea is being stalled, but there are efforts to redo the pilot.