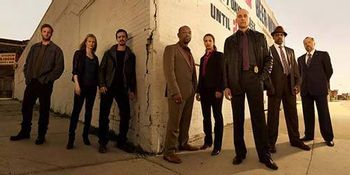 Low Winter Sun is a dark Cop Show/crime thriller from AMC, set in the ruins of modern Detroit on both sides of the law and the spaces in between. A story of murder, deception, revenge and corruption, the show begins on a stark cold open with the murder of Dirty Cop Brendan McCann by his partner Joe Geddes and fellow detective Frank Agnew, ostensibly as revenge for the killing of Agnew's girlfriend. When internal affairs show up the next day to investigate McCann, however, it soon becomes clear that Geddes had his own reasons for wanting his partner dead.

Starring Mark Strong as Agnew and Lennie James as Geddes, the show is a remake of a British miniseries from 2006 that also starred Strong in the lead role.

AMC cancelled the show after a single 10-episode season due to fairly abysmal ratings and lukewarm at best critical reaction. Despite this, very little was Left Hanging and the show rolls pretty well as a self-contained one-off.