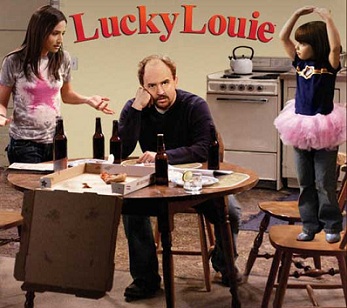 Louis C.K.'s first show, Lucky Louie was HBO's first multi-camera sitcom filmed in front of a live Studio Audience. Airing in 2006, and cancelled the same year, Lucky Louie starred Louis C.K. as Louie, a lower-class husband and father and his family as they struggle through life in Boston.

A throwback to the sitcoms Louis C.K. grew up with like All in the Family, Lucky Louie emulates those shows by not being afraid of a frank and cynical view of life. Lucky Louie also differentiates itself from other modern sitcoms by airing on HBO, which means lots of swearing, Black Comedy, sex-based storylines and nudity (Male only though. Female nudity isn't funny).