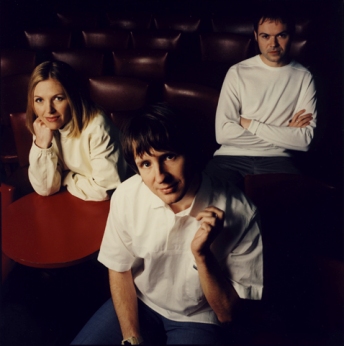 Saint Etienne is an Indie Pop group from London who are sometimes described as making "indie dance" music. The band was founded in 1991 by ex-music journalists Bob Stanley and Pete Wiggs, who named it after a French football team, and they originally had rotating guest singers until Sarah Cracknell joined them permanently, midway through production of their first album.

Their most famous single is their first, a cover of the Neil Young song "Only Love Can Break Your Heart" – which was not sung by Sarah, ironically given that she is generally considered the Face of the Band otherwise.

Most of their music can accurately be described as a love song dedicated to London, the city in which the band is based, despite one of their major influences being Northern Soul music.