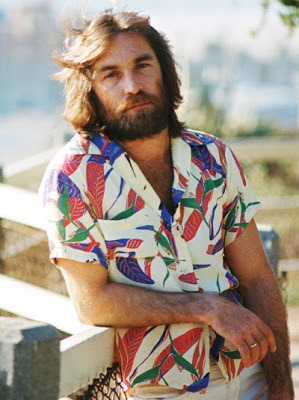 Dennis Wilson, circa 1977.
"They say I live a fast life. Maybe I just like a fast life.
I wouldn't give it up for anything in the world. It won't last forever, either.
But the memories will."
— Dennis Wilson, on the sleeve notes for All Summer Long.
Advertisement:

Dennis Carl Wilson (December 4, 1944 — December 28, 1983) was an American musician born in Inglewood, California. He is best known as the drummer and a founding member of The Beach Boys. The middle Wilson brother - between Brian and Carl, he only learned the drums when the band formed, and as a result his drumming abilities were limited. Despite that, he would become far and away the most popular member during the band's initial fame, particularly with girls. In the earlier years he was generally given at least one lead vocal on most Beach Boys albums, and was a strong supporter of Brian Wilson even up to SMiLE.

After SMiLE collapsed and Brian Wilson began to recede into the background, Dennis had to step up and from Friends onwards he became an accomplished song-writer in his own right, to the point where he is generally considered to be the second-most talented songwriter in The Beach Boys, behind Brian. Among the stand-out songs he would write for The Beach Boys include "Little Bird" from Friends, "Be With Me" from 20/20, "Slip On Through" and "Forever" from Sunflower, "Wouldn't It Be Nice To Live Again" (which was intended for Surf's Up, but remained unreleased until it was included on the Made In California box set in 2013), "Cuddle Up" from Carl and the Passions – "So Tough", "Love Surrounds Me" and "Baby Blue" from L.A. Light Album. Furthermore, Wilson starred in the critically acclaimed film Two-Lane Blacktop alongside James Taylor, and co-wrote "You Are So Beautiful" with Billy Preston in 1974, which would end up as a major hit for Joe Cocker.

Infamously, he was also good friends with Charles Manson in 1968, and was impressed by his musical talent. Manson even gave Wilson one of his songs, called "Cease To Exist". The Beach Boys ended up recording and releasing a cover of the song as "Never Learn Not To Love", which appears on 20/20. However, because Manson had cost Wilson over $100,000 due to medical and living expenses (Manson and his "family" ended up taking over and living in Wilson's house), it was decided not to credit Manson. Eventually though, Wilson realised what Manson was really like and decided to break contact with him. Several months later, the Tate/LaBianca murders took place, and Wilson was understandably shocked. He generally avoided talking about his experience with Manson and was visibly uncomfortable when asked about it.

Dennis Wilson began his solo career in 1970 with the single "Sound Of Free" and "Lady" as it's B-Side. It was only released in Europe and the UK, and was extremely hard to find until it was included on the Made In California box set. In 1977, he released his debut solo album Pacific Ocean Blue, which was not only critically acclaimed, but it outsold then-recent Beach Boys albums. It has a major cult following to this day. There were plans for a solo tour, but the rest of The Beach Boys refused to allow Wilson to go on a solo tour, and threatened to kick him out of the band if he did. Wilson attempted to follow up the album with Bambu, but was marred by lack of financing and his attention having to go to The Beach Boys and their projects around that time. Coupled with his deteriorating personal life, Bambu was ultimately never completed. Two of it's songs - "Love Surrounds Me" and "Baby Blue" ended up on the Boys' L.A. Light Album in 1979. The Bambu sessions were finally released in 2008 as part of the Pacific Ocean Blue reissue.

Wilson's personal life began to deteriorate sharply at the turn of The '80s. He had been fighting his personal demons for years by then, and they were taking their toll on him. He never fully got over the abuse he sustained from his father as a child (along with Brian) and he suffered from a complete lack of self-confidence in himself. His relationship with cousin and fellow Beach Boy Mike Love in particular was infamously bad, with Love denouncing Dennis as "a drugged-out no-talent parasite who we've sacked". Dennis' relationship with his other band members were also generally strained, though he still got along with his brothers. He battled with alcohol abuse - and to a lesser extent drug abuse - and he had become generally unreliable on stage. At the end, on December 28, 1983, Dennis Wilson drowned at Marina Del Ray in Los Angeles. After a day of drinking and partying, Wilson had chosen to dive into the water where his old yacht used to be. He didn't come up, and his body was found several hours later. He was 39 years old.

Despite his tragic ending and decades of his work being relatively obscure, in recent years Dennis Wilson and his work has been Vindicated by History, as evident by the expanded reissue of Pacific Ocean Blue in 2008.