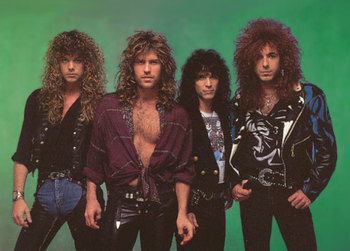 "And who's the one, who claimed my liberty robbed my soul of freedom?
And how long, must I put up with the unholy sound of your gun?
Tell me brother..."
—"Who's the One?"
Advertisement:

Winger is an American rock band that combines elements of Glam Metal and Progressive Metal. While chiefly known amongst the general public for being mocked on Beavis and Butt-Head in the form of a "wussy" Butt-Monkey character, the band have had a solid career (aside from an enforced break caused by the initial rise of Grunge) since 1987.