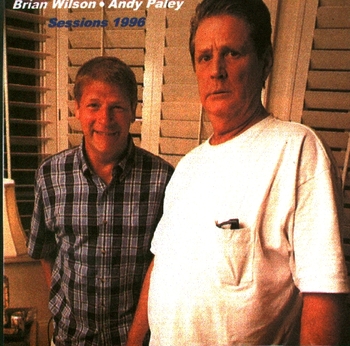 Andy and Brian on the cover of one of numerous bootlegs associated with the sessions.
Advertisement:

The Paley Sessions refer to a period where Beach Boy Brian Wilson was collaborating with Andy Paley on tracks which would end up in an upcoming Brian Wilson solo album or a Beach Boys album. These sessions resulted in dozens of songs recorded yet unreleased for the most part.

The first songs Brian recorded with Andy can be traced back to the late eighties, back when they were working on Brian's debut album. However, a great amount of songs was recorded between 1992 and 1994 when Brian was finally free from the control of his psychiatrist Eugene Landy.

Most of the tracks recorded are reflective of Brian's earlier work, he recalled having a great time working with Andy and even compared him to Phil Spector in terms of talent. Brian also had much more creative control compared to his previous projects and he claimed that "around 40 songs" were recorded during that period.

The Sessions were also a possibility for The Beach Boys to record a new album (after 1992's Summer in Paradise). However, recording sessions involving the other Beach Boys were tumultuous, notably due to Carl Wilson who didn't like the songs and even walked out of the studio during the recording of one song, on top of not wanting "Soul Searchin'" to be released as he was not happy with the production. This (along with other perceived slights between the brothers nearly permanently wrecked their once close relationship, although they made up a few weeks before Carl's death from lung cancer. There was also conflict involving Brian's wife Melinda and how she may have coerced him towards working with producer Joe Thomas and making music that is closer to Adult Contemporary. Such reasons remain uncleared but Brian sure was vocal about the other Beach Boys being a hindrance to his project, to the point of calling them "a bunch of assholes" during an interview at the time.

The Beach Boys did end up releasing an album during that period, except it was the Country cover album Stars and Stripes Vol. 1 which didn't involve Andy at all. The commercial failure of that album prevented The Beach Boys from releasing any other original album (until 2012's That's Why God Made the Radio) and songs from the Paley Sessions were shelved (but it didn't stop them from being bootlegged. This wasn't the end for Andy and Brian, however, as the two would occasionally collaborate on future songs.

The Paley Sessions were brought up again when Brian released his solo album Gettin' In Over My Head which contains rerecordings of songs from those sessions (as well as songs recorded for the cancelled album Sweet Insanity). Outside of this album, other songs were finally released on the compilation Playback: The Brian Wilson Anthology and the soundtrack album of the Long Promised Road documentary.

Tracklist note (due to the fact that the Paley Sessions didn't result in the making of an album, tracklists vary from bootleg to bootleg. The following tracklist is in alphabetical order)