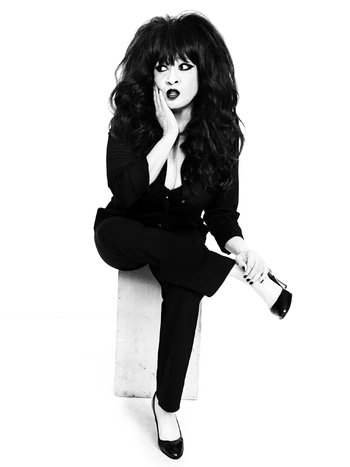 Ronnie Spector (born Veronica Yvette Bennett; August 10, 1943 - January 12, 2022) was an American singer who is best known for being a member of the 1960s Girl Group The Ronettes, which she fronted with her older sister Estelle Bennett and cousin Nedra Talley singing backup.

Hailing from New York City, The Ronettes began performing as teenagers in the late 1950s and were a popular local act when they signed their first record deal in 1961 for Colpix Records. However, they achieved little success until they were discovered by producer Phil Spector, who signed them to his record label in 1963. Phil Spector was particularly impressed with Ronnie's singing ability and originally wanted to sign her as a solo act, but her mother told him that he could only get her by signing the whole group. Nonetheless, Spector singled Ronnie out to be the main star and creative force of the group; Ronnie was the only Ronette to sing on the studio recordings and stood front and center during live performances. Phil Spector had them record multiple songs which he declined to release. That summer, they had a more fruitful session in which they recorded what would become their breakout hit, "Be My Baby". "Be My Baby" is the song in which Phil Spector codified what became known as his signature "Wall of Sound". It was released in August 1963 to critical acclaim and quickly shot up to #1 on the charts. The Ronettes quickly followed up with their second hit, "Baby, I Love You". They then provided three songs for Spector's holiday album A Christmas Gift for You from Phil Spector: "Sleigh Ride", "Frosty the Snowman" and "I Saw Mommy Kissing Santa Claus". While the album flopped largely due to it being released on the same day as John F. Kennedy's assassination, it is now considered a Christmas classic and "Sleigh Ride" has proven to be The Ronettes' most enduring song. The following year saw The British Invasion, but The Ronettes proved to be one of the few American acts whose popularity managed to endure. They released three more hits, "(The Best Part of) Breakin' Up", "Do I Love You?" and "Walking In the Rain". They also released their first (and only) studio album, Presenting the Fabulous Ronettes Featuring Veronica. They then toured the UK with their opening act, an up-and-coming band called The Rolling Stones. Their popularity began to decline in 1965, as the two singles they released that year failed to crack the top 40. However, they toured with The Beatles and still continued to make media appearances. After their tour with The Beatles ended and their 1966 single "I Can Hear Music" failed to become a hit, the group broke up.

Ronnie Spector then tried to pursue a solo career. First she released "You Came, You Saw, You Conquered" in 1969, which was credited as a Ronettes record. It didn't garner much attention. After completing George Harrison's "All Things Must Pass" in 1970, Phil Spector focused on trying to relaunch Ronnie's music career as a solo artist. He had her record the Harrison-penned single "Try Some, Buy Some", which was released as a single in 1971. It also failed, with music critics claiming that Ronnie's vocals didn't fit Harrison's musicianship. While a solo album was planned, it was shelved after "Try Some, Buy Some" flopped.

As The Ronettes rose to fame, Ronnie became romantically involved with Phil Spector, in which he began exerting tight control over her career and life in general. He intentionally began trying to suppress The Ronettes' popularity so he could continue to keep Ronnie under his thumb. He also prevented her from performing with The Ronettes during many of their concerts with The Beatles, instead having her cousin Elaine Mayes perform in her place. After The Ronettes broke up, she and Spector married in 1968. Ronnie claims to have endured extreme levels of abuse and psychological torment from Spector during their marriage. Spector kept her locked up as a prisoner in his mansion for years, confiscating her shoes and surrounding the house with barbed wire and guard dogs so she couldn't leave. He made her care for multiple foster children that he adopted without her permission, prevented her from performing, and sometimes refused to feed her. He also allegedly once took her down to the basement, where he showed her a golden coffin with a glass door and vowed to kill her and display her corpse to the public if she ever tried to leave him. Fearing for her life, she left Spector in 1972 by literally running away barefoot with nothing but the clothes on her back. Their divorce was finalized in 1974, though Spector continued to make her life difficult all the way until he died in 2021 (just a year before her own death of cancer).

Ronnie Spector then plotted her return to the music industry. She reformed The Ronettes with two different backup singers, but the project was short-lived and unsuccessful. She then recorded a duet with Southside Johnny and the Ashbury Dukes, then spent some time performing with both them and The E-Street Band. Spector made multiple other attempts to launch a solo career that ultimately never gained traction due to her largely being perceived as an "oldies" act. She released her first solo album, Siren, in 1980. After it garnered little attention, Spector stepped away from music. She finally received her Career Resurrection in 1986 by performing as a featured vocalist on Eddie Money's smash hit "Take Me Home Tonight". In the wake of this newfound success, Spector released her second solo album Unfinished Business in 1987. While it earned positive reviews, it wasn't a commercial success. However, interest in Spector as a legacy artist proved to be enduring, as her work with The Ronettes received newfound attention. In light of this, she released her memoirs Be My Baby in 1990. At the same time, she entered a protracted legal fight with Phil Spector for her share of The Ronettes' royalties. After a decade in court, she eventually won $1.5 million to be split three ways among her, Estelle and Nedra. Since then she remained in the public eye as both a performer and a public speaker, while occasionally recording new music and working as a session musician. She was frequently seen performing during the holidays, both due to the enduring popularity of The Ronettes' Christmas recordings and because they were the only Ronettes songs she could safely perform without having to deal with Phil Spector coming back out of the woodwork to give her grief.

Widely considered to be one of the greatest pop singers of all time, to describe Ronnie Spector as "influential" would be an understatement. Even if you've never heard of her until now, we can almost guarantee that at least one of your favorite musicians has been influenced by her: The Beatles, The Beach Boys, David Bowie, Billy Joel, The Ramones, and Amy Winehouse (ok, Winehouse went a bit beyond being merely influenced by Spector...) are not even scratching the surface. "Be My Baby" is considered to be a milestone record in rock and roll history and perhaps the greatest pop song of all time. Brian Wilson is famously obsessed with the song and has made emulating its sound his life's ambition. Spector's appearance and general image was widely copied by subsequent girl groups and fictional portrayals of female singers, from the 1960s to the present day. Her 1990 memoir "Be My Baby" is also widely considered to be one of the greatest rock memoirs and essential reading for anyone interested in 1960s music history and the creative processes behind it. It is also currently being adapted into a biopic. Spector was inducted into the Grammy Hall of Fame in 1999, the Vocal Group Hall of Fame in 2004, and The Rock and Roll Hall of Fame in 2007, all as a member of The Ronettes.

For every trope you give me, I'll give you three: