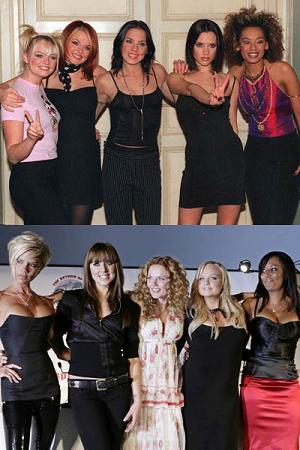 The Spice Girls are a British (English) Girl Group who played a huge role in forming the 1990's for young children across the globe. With songs they co-wrote themselves with Richard Stannard and Matt Rowe, their sound was created to appeal to pre-teens and teenagers alike, using familiar riffs and somewhat suggestive lyrics. As a result, not only were they able to easily break through to the American market, but the group can also be credited as a major factor in shifting the tide in The '90s from Alternative Rock to teen pop music (later solidified by boy bands, Britney Spears, and Christina Aguilera).

The five girl band consisted of:

Despite most European pop bands finding it difficult to break into American mainstream, The Spice Girls' very first single, "Wannabe," shot straight to number one in more than 30 countries, including The United States. Oddly though in the UK, it actually entered the charts at number 3, before going on the spend 7 weeks at number 1.

After their overnight success, a movie, Spice World was released in 1997/early 1998.

Sixty five million records later, the Spice Girls became one of the best selling girl groups of all time. They performed at the launch of Channel 5 in 1997. They suffered a setback in June 1998 after a relatively short run (considering their phenomenal success) when Geri Halliwell (aka Ginger Spice) had a bit of a Creator Breakdown and left the group just days before they were due on stage to perform a sold-out concert at Wembley Stadium. Still, the show went on, and the remaining four released a third album without Halliwell, Forever. After numerous denials that they were going to split, they did.

That wasn't the end of the Spice Girls, however. In 2007, they confirmed that all five would return for a reunion tour, which sold out in every single country they visited. The tour grossed over 100 million USD and was accompanied by a successful greatest hits album, which featured a new single by the girl group. In 2012 they reunited for a performance at the London Olympics. In 2018, a second reunion tour was announced for the UK in 2019, albeit without Victoria's participation.