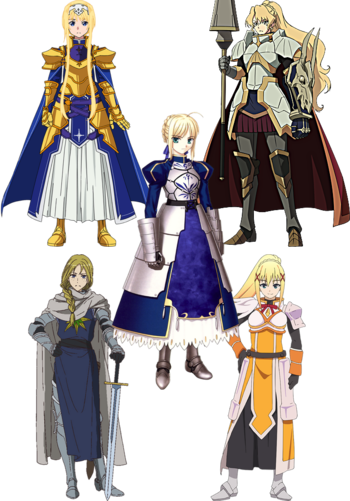 Actually, can I have five more of these blonde lady knights?

note  L-R, top to bottom: Alice Zuberg, Alicetaria February, Female Knight, Darkness, Center: Saber
And there's a million of us just like me
Who cuss like me; who just don't give a fuck like me
Who dress like me; who walk, talk, and act like me
And just might be the next best thing, but not quite me!
— Eminem, "The Real Slim Shady"
Advertisement:

A character who is so popular and impactful that many other characters created afterwards are heavily inspired by it. They share even more than its Archetypal Characters, they are its expies — basically the same old character recycled, with some minor changes to make it fit into the new setting. The original one gives inspiration not just for their basic Characterization Tropes, but for parts of their relationship dynamics, personality, and appearance.

While too many authors using the same obvious expies could be considered a worrying trend in terms of originality, it isn't an inherently bad thing. As a longer time passes, creators might be more and more likely to make bigger changes to the character, eventually growing it into a whole new Character Archetype trope on its own. In other cases, it's possible that the resulting characters are too different even for that: Talented writers can explore certain aspects of a character with an expy, and other aspects with another expy, in a way, that if you would compare the two expies, they wouldn't even appear that similar to each other. While it's possible that a Fountain of Expies also serves as a Trope Codifier for the character's most fundamental tropes, other times the shared similarities are more vague.

In the following "subtropes" list, only add trope pages whose descriptions are explicitly based on the idea of collecting Stock Characters that are based on a first one. There are other tropes that were more indirectly started or codified by certain characters, but these should not be referenced.

See also Alternate Company Equivalent, which is when a character or product from another brand resembles its competitor.

From Anime, Manga, and Light Novels

A Sub-Trope of Follow the Leader. See also Whole Plot Reference when it's the plot, not the character, that's being referenced. See also Cast of Expies and All-Stereotype Cast. See also No Celebrities Were Harmed and No Historical Figures Were Harmed, where it's a fictional character/organization that is based on a real-life person or group.