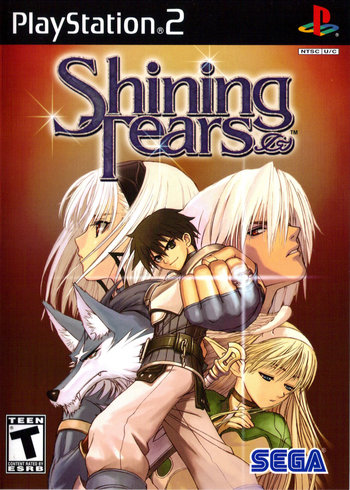 Shining Tears is a 2004 video game released on the PlayStation 2. It's the first game in the Shining Series released on a non SEGA home console as they stopped making consoles in 2001 with the Dreamcast, and it uses the Action RPG format rather than the turn-based one. It managed to get released in English, even though the sequel wasn't as lucky.

The game centers around an amnesiac boy named Xion, who's found washed up on the shore by the elf Elwyn in front of the Heroes Hearth inn. On his hand is a pair of rings called Dragon Rings, if equipped in two people, they grant great power. On the other hand, that also changes Xion's personality. He's an insecure wimp when no one's wearing the ring, he's a serene, noble hero if his pair has a dark soul, and he's a taunting battle crazed maniac when his pair has a light soul. As he tries to uncover his memories, he ends up joining the newly formed mercenary group Weiss Ritter, alongside Elwyn, Doctor Pios; who nursed him back to health; Priestess Ryuna, (literal) Dragon knight/guardian Lazarus, Ice witch Blanc Neige, Wolfkin merc boss Volg, and Cat Girl Ninja Mao, against the Runegeist kingdom who sought to subjugate the whole land. They are later on joined by a wandering swordsman named Keiner, and an elvish bard, one of the past heroes of the age, named Cupido.

While there is an English version and voice acting was provided, they're rather minimal while the Japanese version has voice acting in cutscenes, but otherwise it is still a solid game on its own. It also has an anime or sorts in Shining Tears X Wind, crossing over with the next game, Shining Wind.