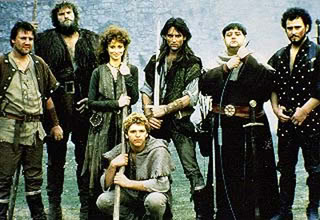 The heroes of the first two seasons. From left to right Will, John, Marion, Much (squatting), Robin, Tuck, Nazir 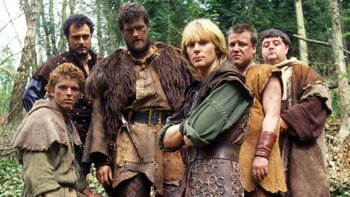 Third season cast. From left to right Much, Nasir, John, Robert of Huntingdon, Will, Tuck (Marion not pictured)
In the days of the Lion spawned of the Devil's Brood, the Hooded Man shall come to the forest. There he will meet Herne the Hunter, Lord of the Trees, and be his son and do his bidding. The Powers of Light and Darkness shall be strong within him. And the guilty shall tremble.
Advertisement:

A 1980s television retelling of the Robin Hood legend, with a large dose of Celtic mysticism. In this version, Robin is The Chosen One, the spiritual son of pagan forest-god Herne the Hunter. Notable for being the first version to get away from the green-tights-and-hat-with-a-feather image in favour of something a band of 12th century outlaws might actually wear, for introducing the idea of a Saracen outlaw which was copied by later adaptations, and for portraying King Richard as just as bad as Prince John.

Besides these, perhaps it is most notable for having two different Robins — one a woodsman, the other a nobleman — allowing it to cover the two different versions of Robin found in the various (contradictory) tales. The original, played by Michael Praed, appeared in the first two series; Jason Connery played his replacement in the third and final series. The Maid Marion for both was Judi Trott, playing Marion of Leaford, a former ward of the Sheriff's brother, who in this version is an active member of the Merry Men.

The series spawned the usual 1980s set of Spin-Offs, including a three volume novelisation by the original TV creator Richard Carpenter, which covered the whole series except for the third-season episodes that he didn't write, and a Robin Of Sherwood Text Adventure video game by Adventuresoft for various eight-bit home computers. There were also two Gamebooks - The King's Demon and The Sword of the Templar.

There were plans for a fourth series, but the production company ran out of money; there were several attempts up until 2010 to revive it, including plans for a movie and several attempts to pitch a new series to ITV, none of which came to anything. Robert Addie, who played Guy of Gisburne, died in 2003 and Richard Carpenter died in 2012. Still all of the surviving castnote Notably both Michael Praed and Jason Connery took part - Connery played Robert of Huntingdon and Praed peformed the "Spectral Voice" role marking the only time they'd worked on the same project within the franchise. were finally able to reunite in 2015 for "The Knights of the Apocalypse",

an audio drama based on an unfilmed script of Carpenter's. It was released in 2016.

The series are also known for putting Irish music group Clannad on the map (apart from their theme from Harry's Game).

Robin Of Sherwood provides examples of: