Series / The Adventures of Robin Hood 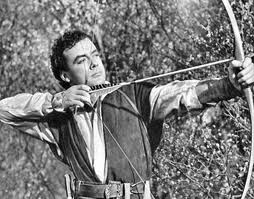 He called the greatest archers to a tavern on the green!
They vowed to help the people of the king!
They handled all the trouble on the English country scene!
And still found plenty of time to sing!
Advertisement:

The Adventures of Robin Hood is a British television series that ran for 143 episodes from 1955 to 1959, starring Richard Greene in the title role. Produced in the very early days of commercial television in the UK, The Adventures of Robin Hood was the brainchild of Hannah Weinstein (an American producer living in the UK having been blacklisted for her leftwing views) and was commissioned by the Russian-born media mogul Lew Grade (who had just started what would become ITC Entertainment; this was the very first show they ever did). Grade hoped to profit by selling the series to the United States, and so Robin Hood became the first of many big-budget British series to be produced with the American market in mind.note Other series commission by Grade included The Saint, The Prisoner, The Muppet Show and various Gerry Anderson productions. Episodes were based both on existing legends and original stories, often written by blacklisted American screenwriters, who had to use pseudonyms to avoid problems when the series was sold in the US.note Weinstein’s political activities weren’t limited to hiring blacklisted screenwriters. Her company, Sapphire Films, was allegedly partly funded by the US Communist Party.

The first three seasons are currently available on Hulu

Not to be confused with the Errol Flynn film of the same name.

The series provided examples of: