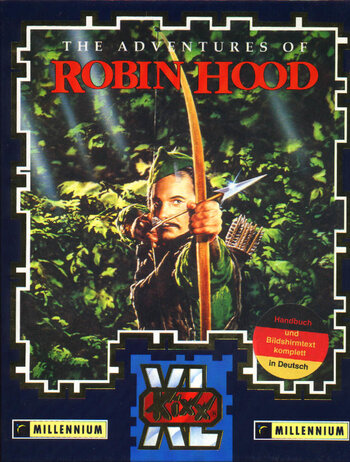 The Adventures of Robin Hood is a 1991 Isometric Action-Adventure Video Game by Millennium Interactive. It features several characters and tropes from Robin Hood mythology but isn't directly connected to other works.

The sheriff of Nottingham seizes Robin's castle and the peasants aren't eager to help him. Robin needs to raise his popularity among the villagers and then recapture the castle by killing the sheriff and his thugs. Little John, Will Scarlet and Friar Tuck can be hired to help and Marian serves as the love interest.

The game features a kind of early miniature version of a Wide-Open Sandbox with In-Universe Game Clock and NPC Scheduling. Peasants hunt, farm, collect firewood and beg for money, monks build monastery and bury corpses, guards collect taxes and hang poachers, and so on. Unlike many Robin Hood adaptations, the game has several fantasy elements such as a dragon, talking animals and magical items.