Film / The Adventures of Robin Hood 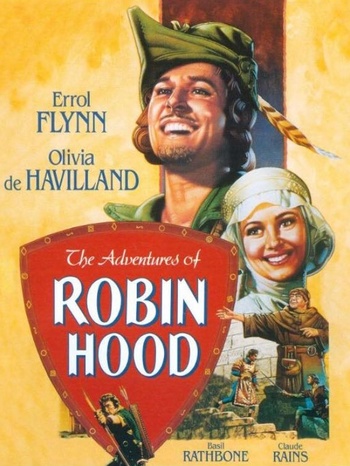 In the year of Our Lord 1191, when Richard, the Lion-Heart, set forth to drive the infidels from the Holy Land, he gave the Regency of his Kingdom to his trusted friend, Longchamp, instead of to his treacherous brother, Prince John. Bitterly resentful, John hoped for some disaster to befall Richard so that he, with the help of the Norman barons, might seize the throne for himself.
Advertisement:

The film was originally intended as a vehicle for James Cagney, who had gained critical approval for playing Bottom the Weaver in Warners' 1935 production of William Shakespeare's A Midsummer Night's Dream — but when Cagney walked out on his Warners' contract, the project was retooled to accommodate rising Warners' star Errol Flynn, who had in that same year made a huge impression as the swashbuckling lead of the pirate romance, Captain Blood. Olivia de Havilland, having appeared in both movies, was a natural for the part of Lady Marian. Korngold, too, had been associated with the same two films, as adaptor of Felix Mendelssohn's theatrical music for Dream and as composer of a (mostly) original score for Captain Blood. Basil Rathbone, having displayed in Captain Blood as the evil pirate Levasseur a fine talent for fencing and sneering villainy, was tapped to play the part of Sir Guy of Gisbourne. When director William Keighley was determined by the Warner brothers to be too dilatory and measured in his approach to the film, he was replaced with yet another Captain Blood alumnus, hard-driving director Michael Curtiz.

The script, by Seton I. Miller and Norman Reilly Raine, was considerably more faithful to both the matter and the spirit of the original Robin Hood ballads than earlier dramatic versions. This was largely in reaction to Robin Hood (1922) starring Douglas Fairbanks, which had focused on a Knight in Shining Armor version of Robin, with much screen time devoted to The Crusades and tournaments and relatively little to the character's woodland outlawry. Early drafts of the script omitted Marian entirely, as Miller insisted that she was not part of the original mythos at all; fortunately, the Rule of Cool (romance division) and the chemistry between Flynn and de Havilland ensured her appearance in the final version. Miller did manage to include many elements of the ballads: the quarterstaff bout between Robin and Little John, Robin forcing Friar Tuck to carry him across the stream, even (delicately, for fear of the Catholic Legion of Decency) Robin's antipathy to bishops, though a sequence showing an exchange of fisticuffs with the disguised King in Sherwood was cut in the final edit. On the other hand, many elements that came into the legend only later were also incorporated into this version, such as the identification of the King with Richard I from the Tudor historian John Major; the treachery of Prince John, the identification of Maid Marian with the King's ward Lady Fitzwalter, and Robin's elevation to the nobility, from Anthony Mundy's Elizabethan plays; and the struggle between Normans and Saxons from Sir Walter Scott's Ivanhoe.

Erich Wolfgang Korngold was initially reluctant to be associated with the "90% action picture"; however, the Warners were insistent, offering extremely generous payment for his services, and he at last agreed, leaving his native Austria just in time to escape its annexation by Nazi Germany in March 1938. The Jewish Korngold was later accustomed to say, "Robin Hood saved my life." It is said that Warners provided a voluminous report on 12th century music to the composer, which he promptly dumped into the wastebasket (but see Regional Riff, below); in the event, Korngold's lush Late Romantic score, characterized by Wagnerian themes and leitmotifs, not only won the Academy Award, but set a pattern for Film Music that has lasted down to the days of John Williams and Hans Zimmer.

Other notable talents engaged for the film included fencing master Fred Cavens (yet another veteran of Captain Blood!) to choreograph the swords and champion archer Howard Hill to perform the film's archery (and to appear in the small part of "Captain of Archers"). There is some debate as to whether Hill actually accomplished the famous shot with which Robin splits an arrow with another arrow (the MythBusters actually tested this one out), but it seems most likely that some form of staging was used. Various stuntmen were paid an extra $150 (the equivalent of $2800 in 2016) to allow Hill to shoot them in their specially padded torsos.

Synopsis
In the late 12th century, King Richard the Lion-Heart (Ian Hunter), returning from The Crusades, has been taken prisoner, and his treacherous brother Prince John (played delightfully by Claude Rains as a silky, effete Deadpan Snarker), with the help of compliant Norman barons such as the brutal Sir Guy of Gisbourne (Basil Rathbone) (whose support he gains by promising him marriage to King Richard's ward, Lady Marian Fitzwalter (Olivia de Havilland)), the Sheriff of Nottingham (Melville Cooper), and the Bishop of the Black Canons (Montague Love), is oppressing the Saxon peasantry in an attempt to squeeze money out of them, ostensibly to ransom Richard, but really to buy his way to the throne.

He is opposed by the Saxon knight, Sir Robin of Locksley (Errol Flynn), who, as the outlaw Robin Hood, gathers a band of Saxon resistance fighters, including Will Scarlet (Patric Knowles), Much the Miller's Son (Herbert Mundin), Little John (Alan Hale, Sr., reprising the rôle he had played 16 years before in the Douglas Fairbanks, Sr., silent), and Friar Tuck (Eugene Palette).

After Robin has stolen back the ransom money (and in the process won the heart of Lady Marian), he is taken prisoner at the archery tournament when his brilliant archery reveals who he is; he subsequently escapes (with Marian's aid, we are told).

Shortly thereafter, King Richard has returned to England in disguise; he is recognized by the Bishop, who informs Prince John and Sir Guy. When Marian overhears their plot to send the disgraced former knight Dickon Malbête to murder the king, she is detected by Sir Guy trying to send a warning, arrested, and condemned to death, but her lady-waiting, Bess, warns Much, who intercepts and kills Dickon. Meanwhile, Richard, in the guise of an abbot, has allowed himself to be captured by Robin.

When Much reveals John's plot and Marian's condemnation, they devise a plan to crash Prince John's coronation, disguised as the Bishop of the Black Canons' followers. A melee breaks out; Robin and Guy fight, and Guy is killed. Robin frees Marian. King Richard banishes Prince John, the Sheriff, the Bishop, and their followers from England for the remainder of his lifetime; pardons the men of Sherwood, and rewards Robin with an earldom and the hand of Lady Marian in marriage.