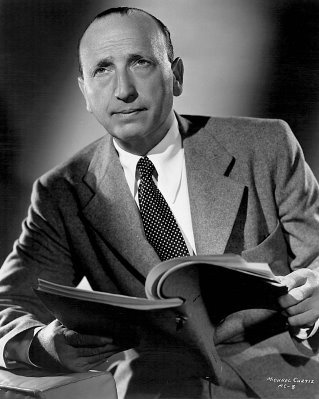 "The only things you regret are the things you don't do."
Advertisement:

Michael Curtiz (born Manó Kaminer; December 24, 1888 – April 10, 1962) was one of the most prominent, prolific and successful directors of The Golden Age of Hollywood.

Born Kertész Kaminer Manó in Hungary, Curtiz grew up in Budapest, studying at the Royal Academy of Theater and Art and working as an actor and a theatre director before helming his first feature in 1912. He'd already made dozens of films in Hungary and Austria by the time Jack Warner signed him and brought him to Hollywood to work for Warner Bros. in 1926, and he became the studio's top director within a few years of his arrival.

Curtiz blossomed in the studio era, showing a knack for handling any genre with skill. Due to the fact that he wasn't a screenwriter and eschewed showy camera tricks, he's never been given the auteur status bestowed upon such contemporaries as Frank Capra, John Ford, Alfred Hitchcock, or Orson Welles, but for over two decades Warner Bros. entrusted him with their best scripts, and he never screwed them up. On sets, Curtiz was known as a workaholic and a demanding perfectionist; James Cagney once said about him, "Mike was a pompous bastard who didn't know how to treat actors, but he sure as hell knew how to treat a camera."

Curtiz's career foundered after his departure from Warner in 1954, but he continued to direct films as a freelancer until shortly before his death from cancer at age 75.