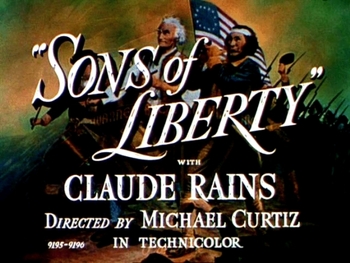 It's the story of Haym Salomon

, a Real Life broker and financier who helped fund the American war effort during The American Revolution. Haym, a Jew from Poland, believes in America as a haven from religious persecution, having escaped anti-Semitic persecution in Europe. He acts as a spy against the occupying British in New York, is imprisoned, and escapes. Finally gaining refuge in Philadelphia, he embarks on an emergency fundraising campaign to allow George Washington's army to conduct the 1781 campaign that led to victory at Yorktown and American independence.

Sons of Liberty is atypical for short films of the day, which usually featured second- and third-tier studio talent. Instead, this film was helmed by Curtiz, Warner Brothers' top director, and starred Rains, one of its biggest stars.

Not to be confused with the television series Sons of Liberty.