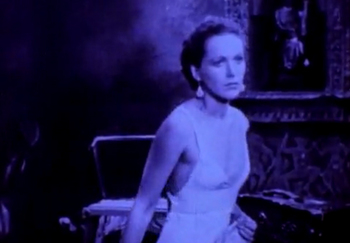 Well, it's sort of by Joseph Cornell. Cornell, an artist, had acquired a print of a 1931 B-Movie called East of Borneo, a cheesy jungle adventure flick starring actress Rose Hobart. Cornell, who was a fan of Hobart, started messing with the print, editing it down until it was a 19-minute film consisting almost entirely of shots of Hobart. He further altered the film by slowing it down to silent film speed (16 FPS as opposed to the talking speed of 24 FPS), and running the whole thing through a blue filter to achieve the blue tint typical of silent movie night scenes. Slowing the film down required losing the soundtrack, so Cornell dubbed in a soundtrack of peppy Brazilian samba music.

He also edited in some footage of a solar eclipse, for some reason.

The result is a Le Film Artistique that, to the extent it is about anything, seems to be a portrait of female desire.

Salvador Dalí is reported to have gotten violently angry at a screening of the film because Cornell had put some aspects of surrealist cinema into practice before he could. Which is approval of a sort.