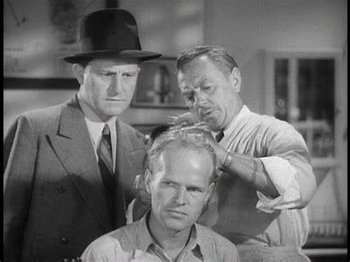 Eddie does not have burlap fiber in his hair.

They're Always Caught is a 1938 short film (20 minutes) directed by Harold S. Bucquet.

It is an installment in the "Crime Does Not Pay" series of shorts produced by MGM in the 1930s and 1940s. In this one the "MGM Crime Reporter" introduces "Dr. John Fisher" (both actors, of course) of the "Scientific Crime Laboratory", who tells a murder story.

The setting is an anonymous American city that is ridden with corruption, graft, and bribery, and organized crime controlled by "Big Matty and the syndicate". Mayor Fletcher, however, is determined to clean up his town, canceling graft-tainted contracts and firing corrupt officials.

Working with the mayor to rid the city of corruption is prosecutor Jimmy Stark—or so it seems. In fact, the prosecutor is in bed with the crime syndicate and is deliberately targeting only small fry while leaving "Big Matty" untouched. Mayor Fletcher has figured this out, however, and confronts Stark, demanding his resignation.

Stark, fearing exposure, assassinates the mayor by means of a car bomb. He gets a huge break when a man who was spotted loitering in the area (he had hoped to speak to the mayor) is arrested. But Dr. Fisher eventually discovers the truth.